Minnie always has a selection of books ready at the end of the day for her bedtime stories, & often during the day she asks for books to be read to her, or she sits & ‘reads’ stories to her toys. One of the best parts of the day is sharing a story with Minnie, she gets so engrossed in the book & it’s just wonderful to watch her eyes as they scan the illustrations. It’s lovely when she starts to join with a repeated refrains as well, or completes a sentence by adding the last word, of course books that have a rhyming text are particularly good for this.

One of Minnie’s current favourites is “Owl Babies” by Martin Waddell and Patrick Benson. 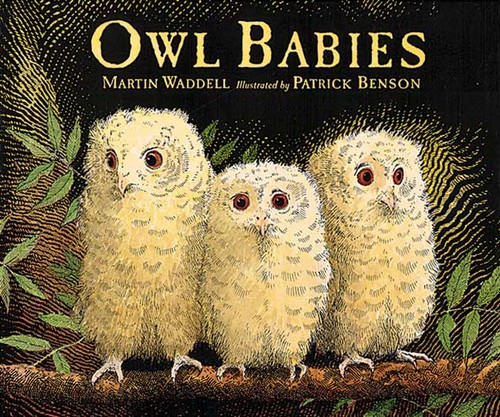 This beautiful book tells the tale of three baby owls as they wait in their nest for the return of their mother. It’s a reassuring story for any child who worries about a parent leaving them alone. The illustrations fill the page & draw the reader into the story. Minnie loves to join in with the repeated phrases; “All owls think a lot” & “I want my Mummy”

To encourage Minnie to explore the story we made three simple owl puppets from recycled materials we had at home. 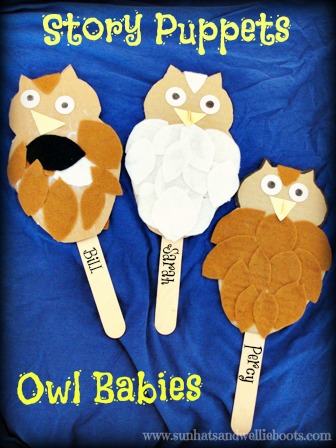 I drew an owl shape onto an old cardboard box, cut it out & used it as a template to create 2 more owls. We had some odd scraps of felt which I cut into feather shapes (paper would work just as well) & I cut six small white circles out of card for eyes adding some detail with a black pen. To create the beaks I cut three triangles from some gold coloured wrapping paper. We used glue sticks to attach the fabric & card to the cardboard shape which dried quickly & held the materials together well.

We had some large lolly sticks left over from a previous craft, & attached these to the back of the owl with some sticky tape. These were a perfect size for Minnie to hold & meant she could hold two or more owl puppets in one hand when telling the story. 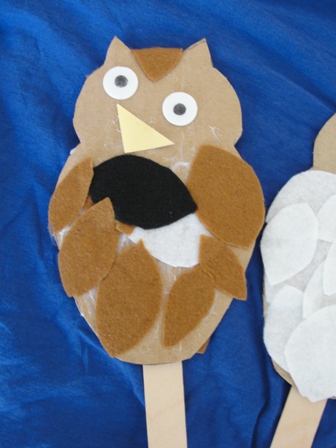 Soon she was retelling the story & adding her own interpretation. It was fascinating to listen to the amount of language she used, & just how much of the story & sequencing of events she had remembered.

The owl puppets have since had a tea party & visited the dolls house & sandpit, who knows what adventures they will have next!