The recent snow has been great fun to play in. We’ve enjoyed building snowmen & snow rabbits, going sledging & making snow angels, but the other day Minnie noticed some patterns in the snow. We have a great selection of wildlife in our garden & some of it had left tracks in the snow for us to follow! 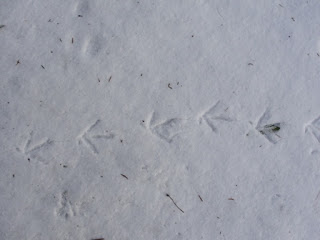 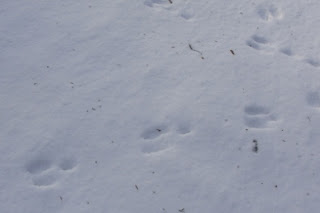 Minnie had so much fun following the patterns the footprints had made, especially when the patterns crossed over each other.

The snow patterns gave a great opportunity to talk about the animals & birds that had left the footprints, about size & shape, & how many footprints & different patterns we could find. It then gave us the chance to talk about hibernation, & which animals we had & hadn’t seen out in the snow. We then made our own wellie boot patterns in the snow, some of which travelled from one side of the garden to the other... & back again!

I love the fact that we had so much fun & great conversation from a simple observation Minnie had made!
Posted by Sun Hats & Wellie Boots at January 02, 2011
Email ThisBlogThis!Share to TwitterShare to FacebookShare to Pinterest
Newer Post Older Post Home