Dinosaur World Made from an Egg Carton

We've had a few egg cartons in our craft box for a couple weeks now & have been wondering what to use them for, then inspiration struck last week - let's create a Dinosaur World! So with a quick hunt around our craft stash & the garden we created these small world play areas. I was going to feature just one, but love them both & couldn't decide between them, so here are our two creations, Dinosaur World & Fairyland! 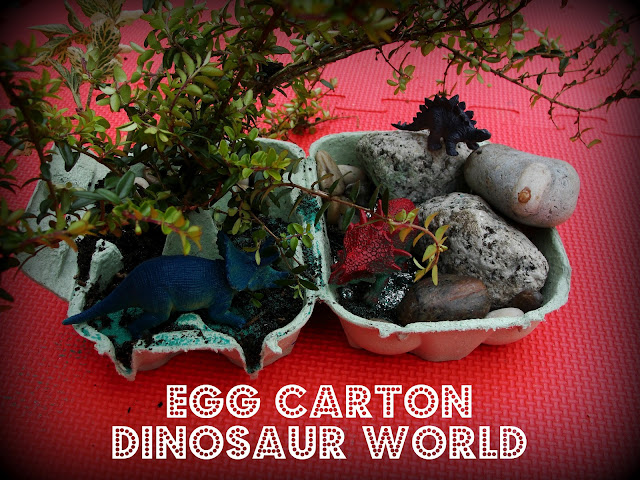 She scooped green coloured sand from her sandpit & mixed together with a little soil filling one half of the egg carton. 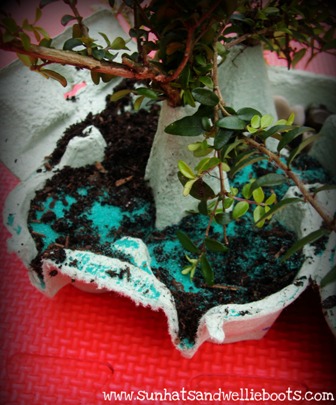 Small pebbles were added along with a few branches that had been collected from nearby shrubs. Minnie (under supervision) made a hole in the centre sections of the egg carton using a biro & then pushed the branches through. 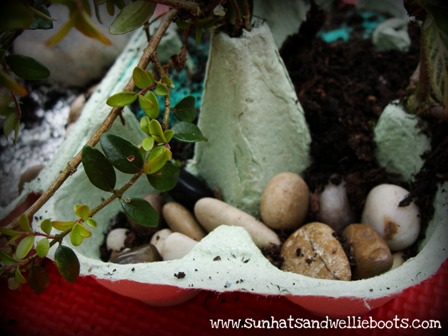 We picked up a selection of small toy dinosaurs & fairy play figures from a local charity shop last week & they were perfect for these egg carton play worlds. Minnie loved mixing the sand & soil between her fingers, & hiding the dinos beneath it. 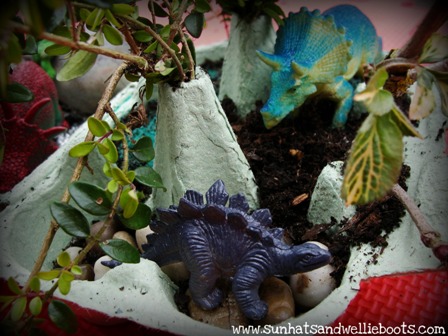 She was keen to add water to the other half of the egg carton so the dinosaurs could have a bath! We talked about what would happen to the cardboard if water were added, & I suggested using tinfoil instead. She agreed she didn't want the carton to go soggy, so we added some foil to the base, along with more stones she had collected. (We've since added a shallow plastic dish to the foil side & added water so the dinos can have a real splash!) 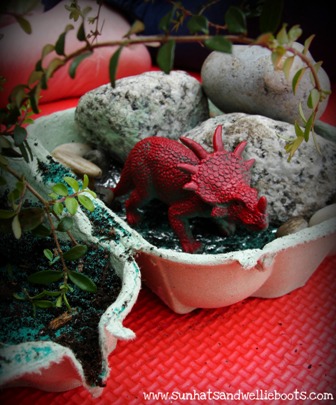 A perfect space to cool off under the shade of the 'trees' in the water! 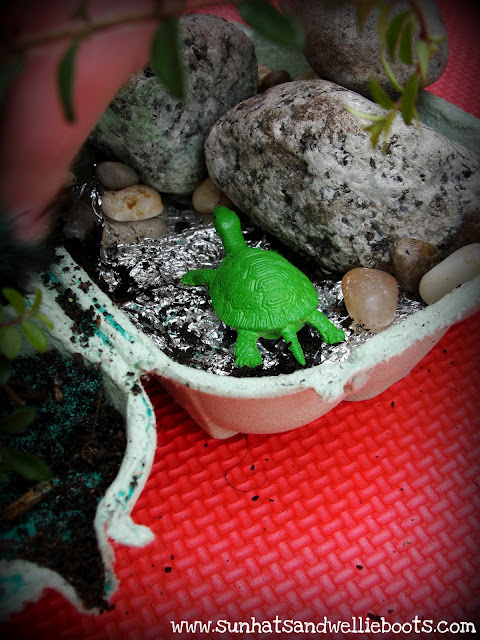 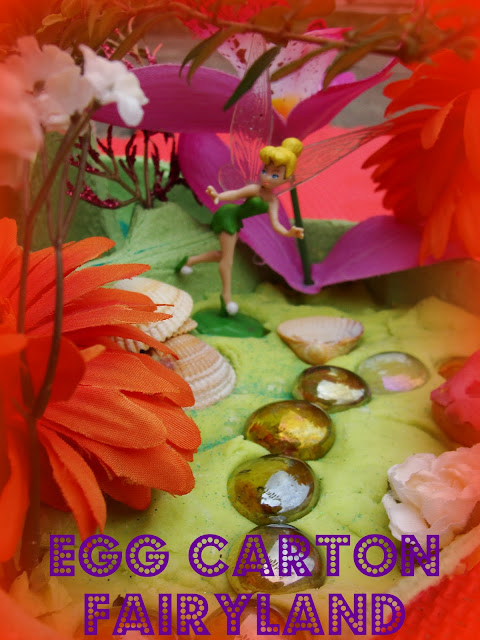 She used more green sand, but this time added some old glass beads to one half of the carton. 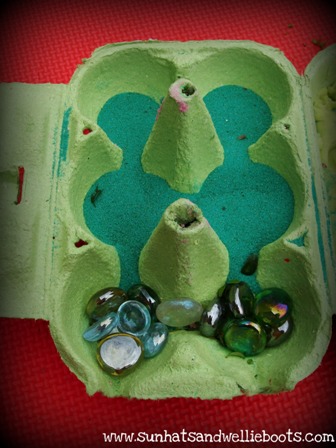 She squashed play dough into the other half & we made a path with more glass beads. 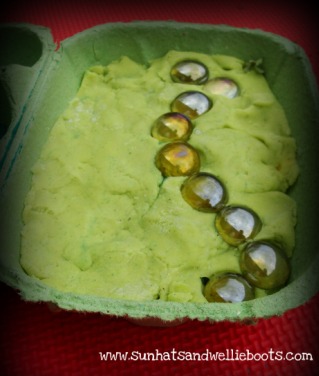 The 'trees' were added (as they were before) & Fairyland was taking shape. 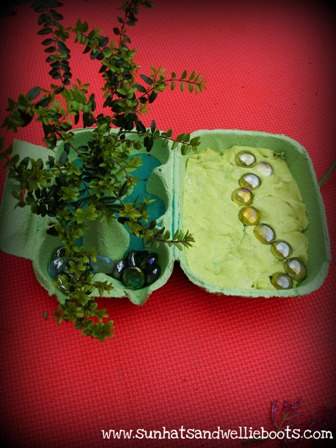 Minnie decorated her fairyland by pushing silk flowers into the play dough. We found these colourful blooms at a jumble sale a while ago & she has loved playing with them ever since. 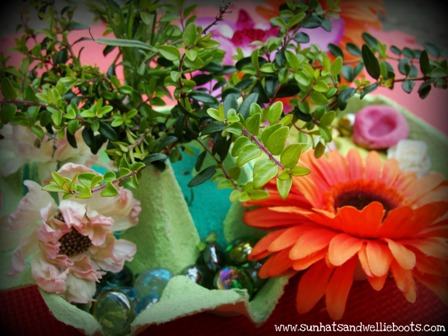 She added shells to make steps for the fairies, & made a pink "soft armchair" for them to rest in the garden. 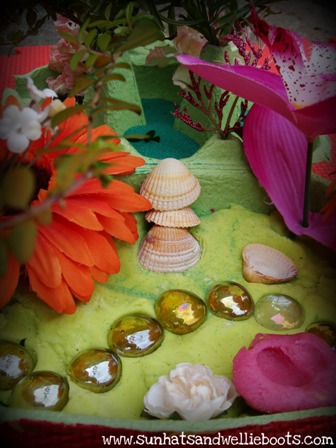 Even Snow White was invited to visit! 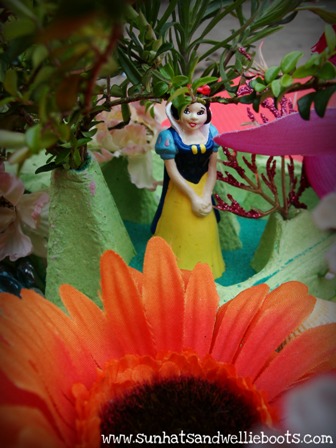 The flowers were great for playing 'hide & seek' 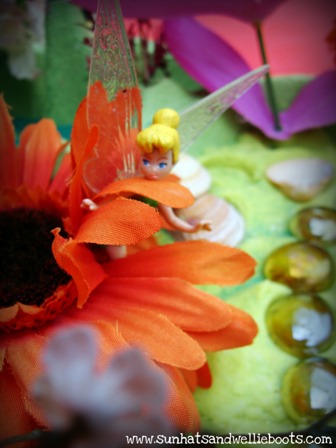 These 'egg carton worlds' have encouraged so much imaginative, creative, & sensory play & discovery. They've been a big hit with Minnie, & her friends, & are so simple & frugal to create with a few small world play figures, & some bits from your home/garden. 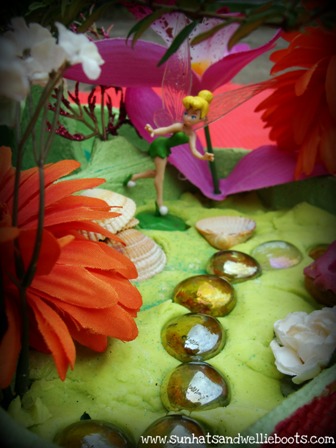 The best thing is that these egg cartons can be carefully folded (using the sand half as the base) & stored to be used at a later date. The contents can be stored inside, although the greenery will have to be replaced next time you use them.

What small world could you create with an egg carton? We'd love to see what you come up with.