"Hooray for Fish!" - Exploring the Story with Clay

"Hooray for Fish" by Lucy Cousins has been one of Minnie's favourite books since she was a toddler. The bright, bold, & colourful illustrations have had her captivated, & the creative creatures have sparked oddles of giggles. Now she can read the book herself & she's still fascinated by the magical creations that fill every page. In fact they've inspired her to create her own selection of creatures on paper & with clay. 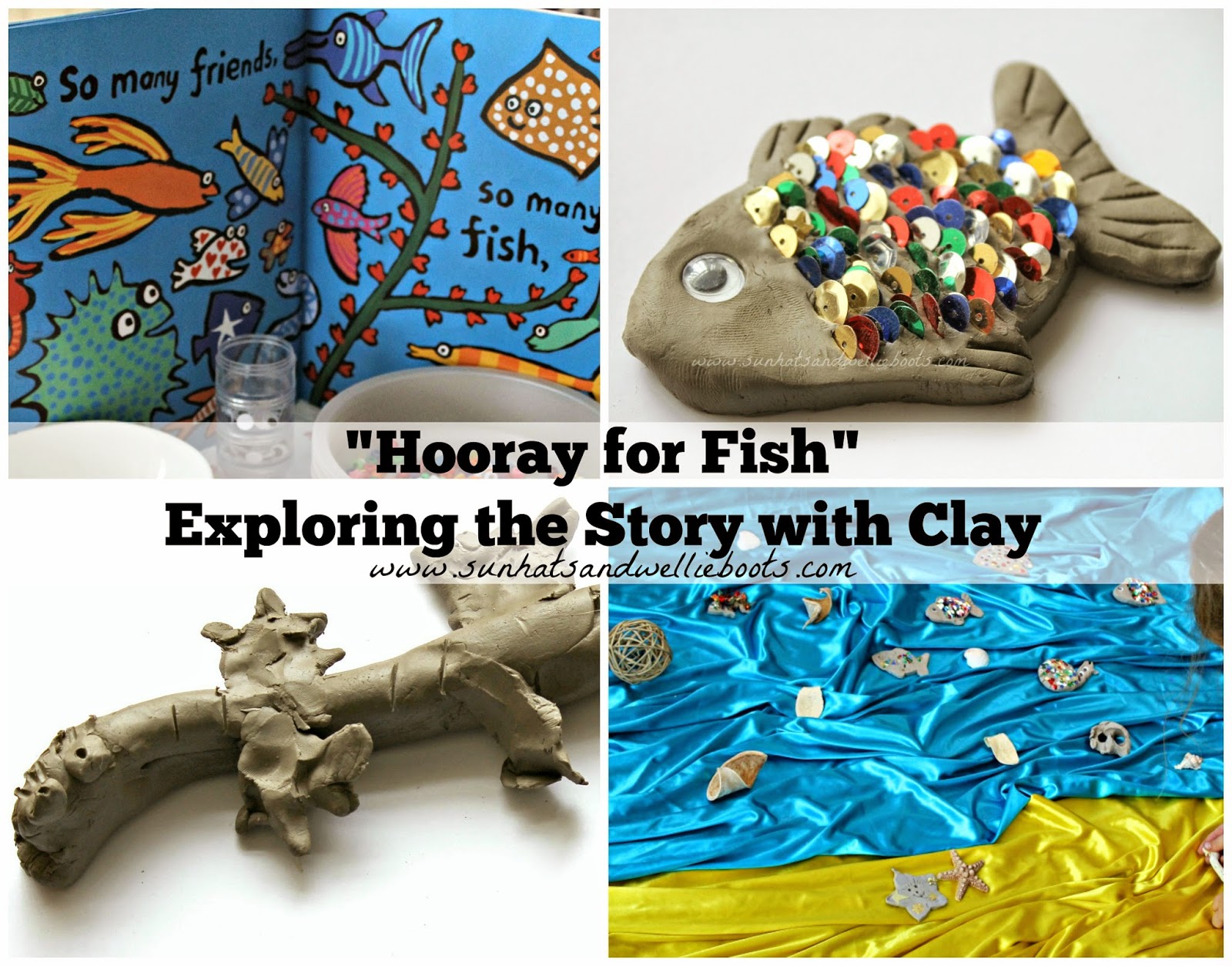 With the storybook as a reference, along with some clay, cookie cutters, beads, sequins & googly eyes she was all set to design & create her underwater creatures. 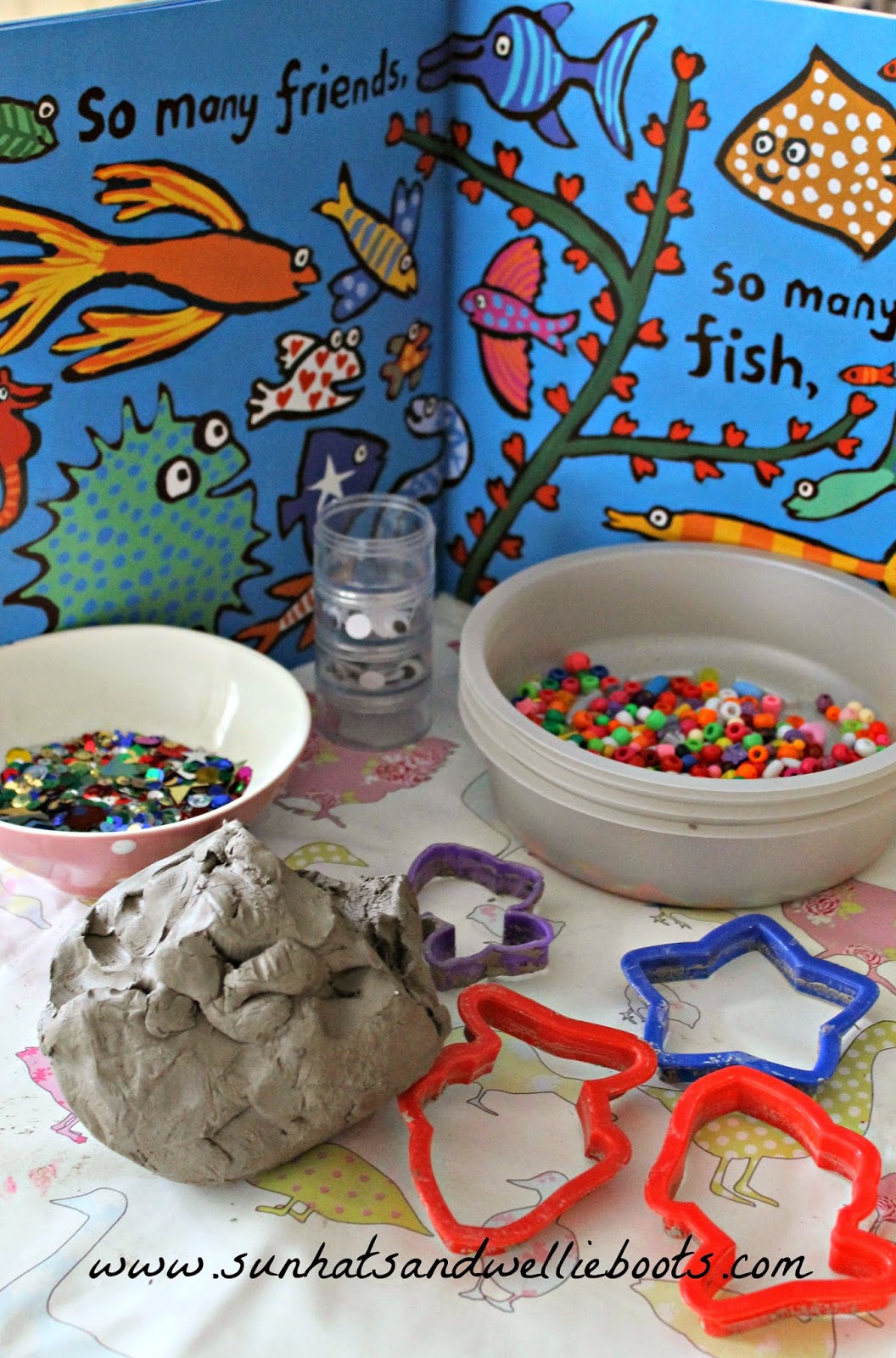 As she rolled out the clay to soften it she talked about the various creatures & their features & which ones she liked best. After this her imagination was well & truly fired up & her ideas were flowing fast as she began to sculpt with the clay. 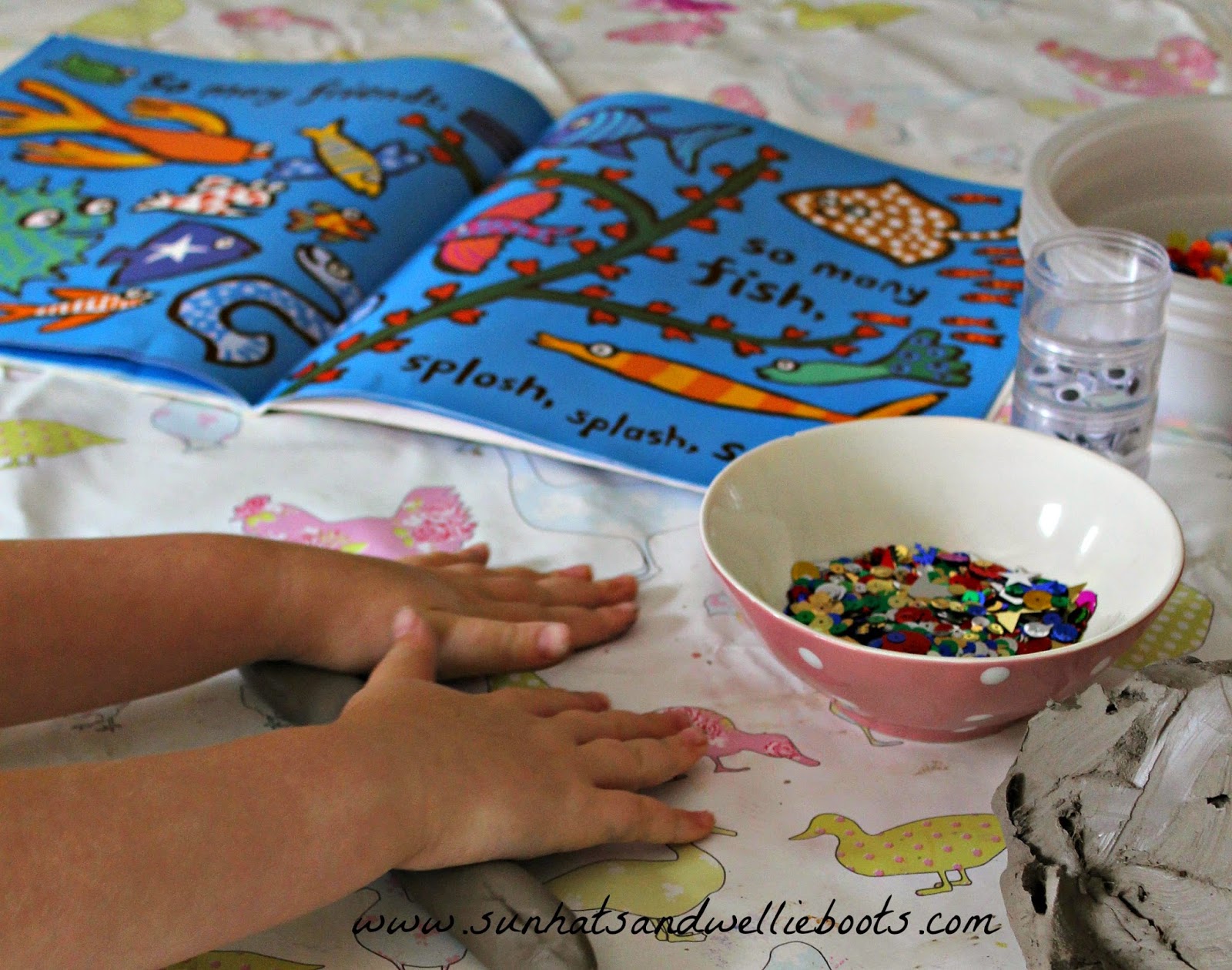 The cookie cutters she used created a neat fish shape when pushed into the clay & by adding sequins she was able to create some colourful fish scales. These not only created a beautiful effect as they reflected the light, but also enabled Minnie to explore patterns & her fine motor skills as she carefully placed each sequin alongside the previous one. 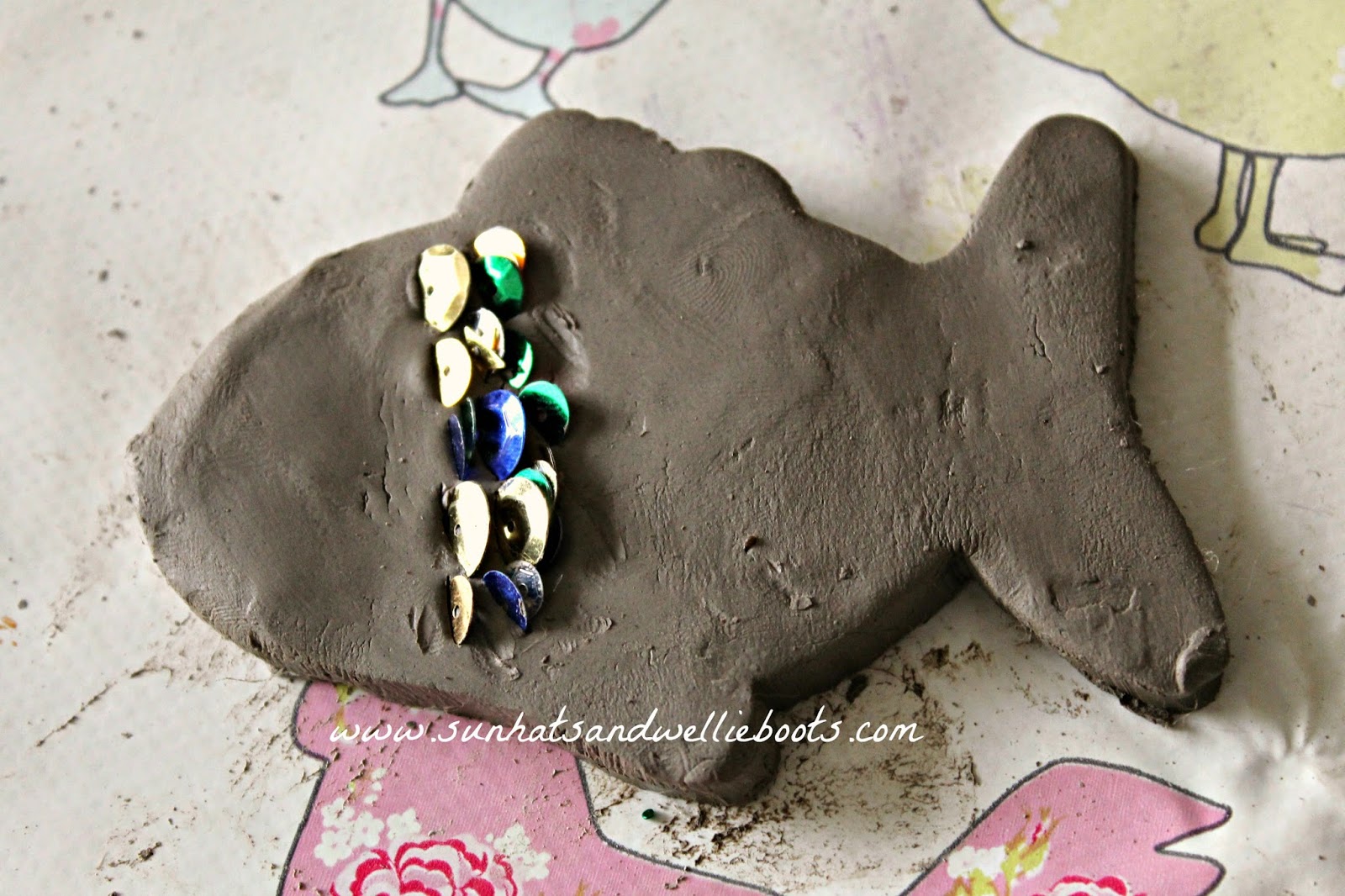 For extra detail & to sculpt the facial features Minnie carefully used a pencil & a blunt knife. Then googly eyes were added & the creatures were left to dry overnight. 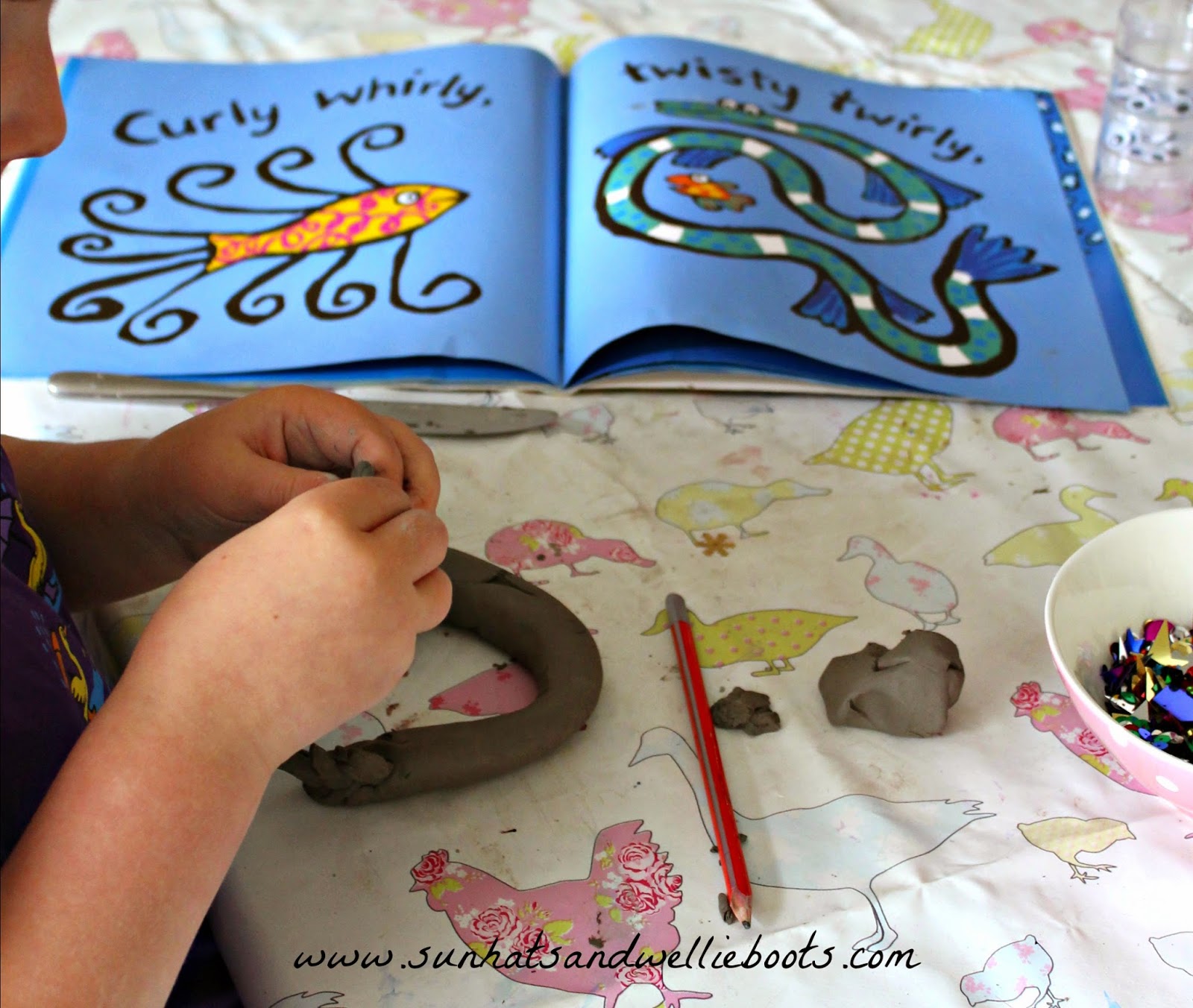 Here are just a few of her creations. First up is her "Cat Fish" 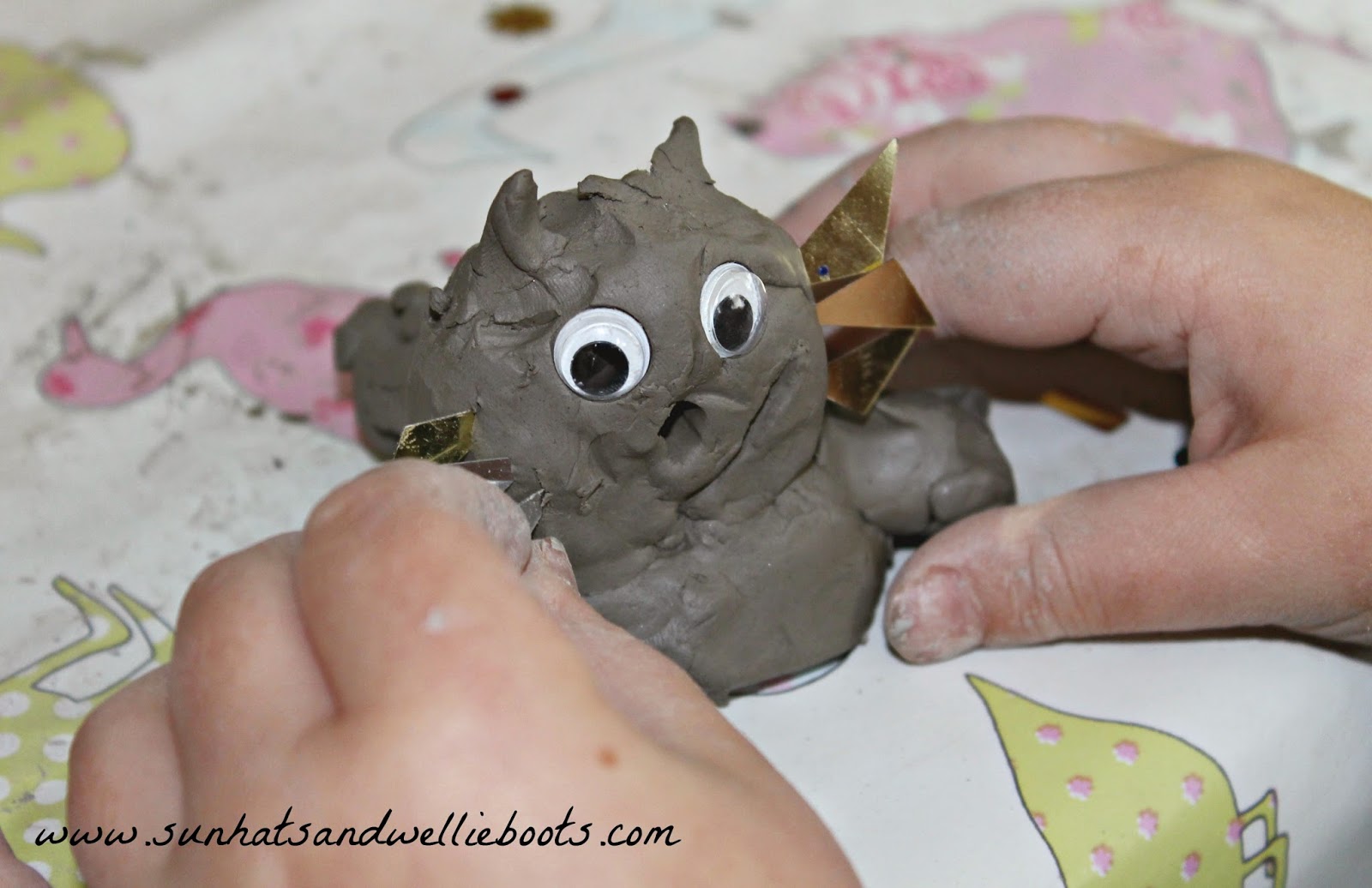 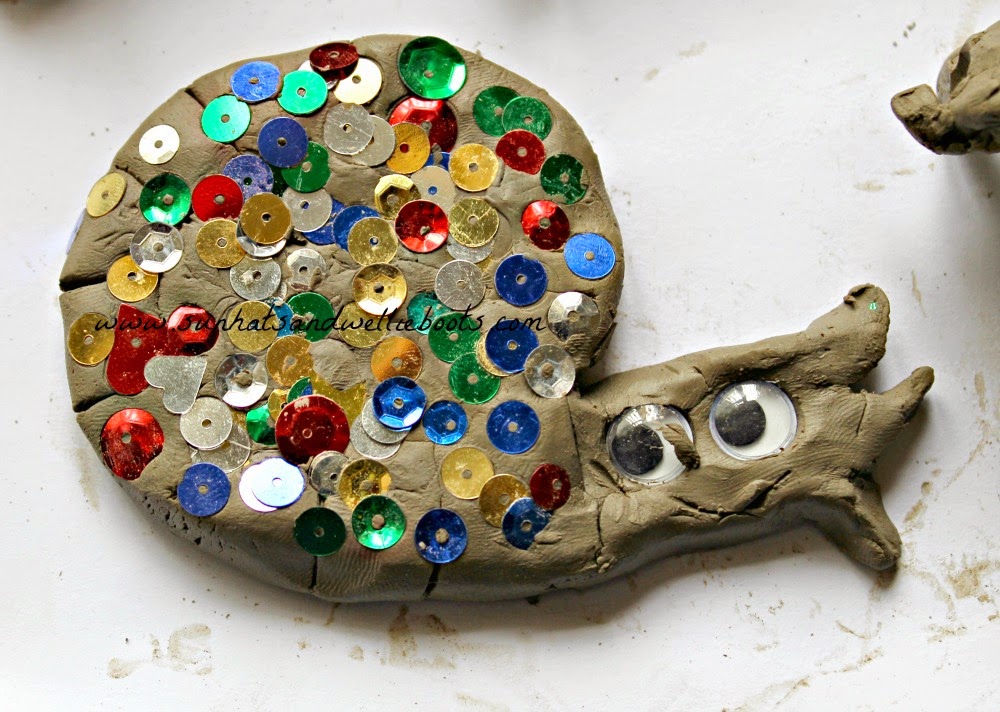 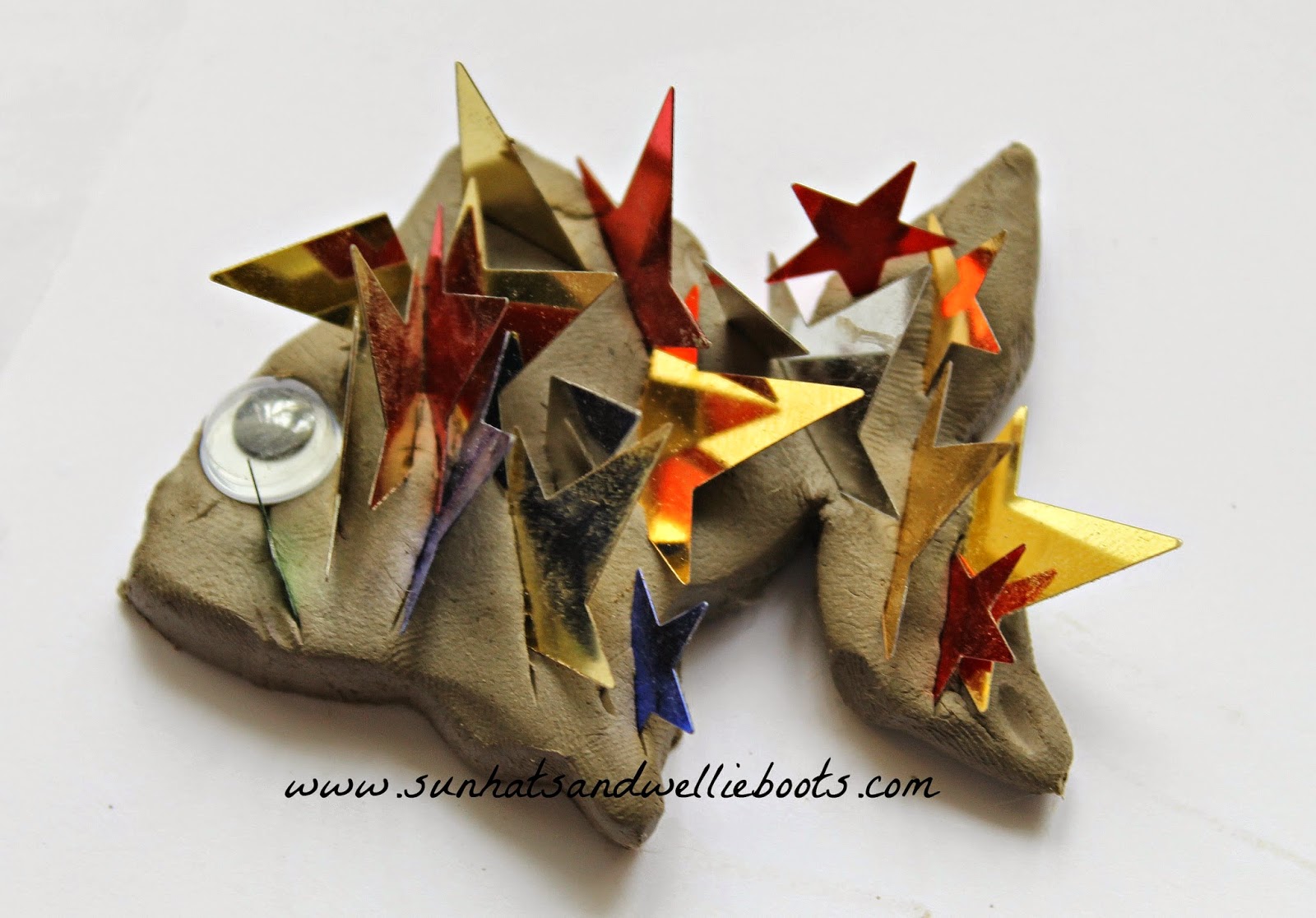 "Twirly Curly Fish". This is my favourite, I just love how she moulded the fins & tail, & the expression on its face. 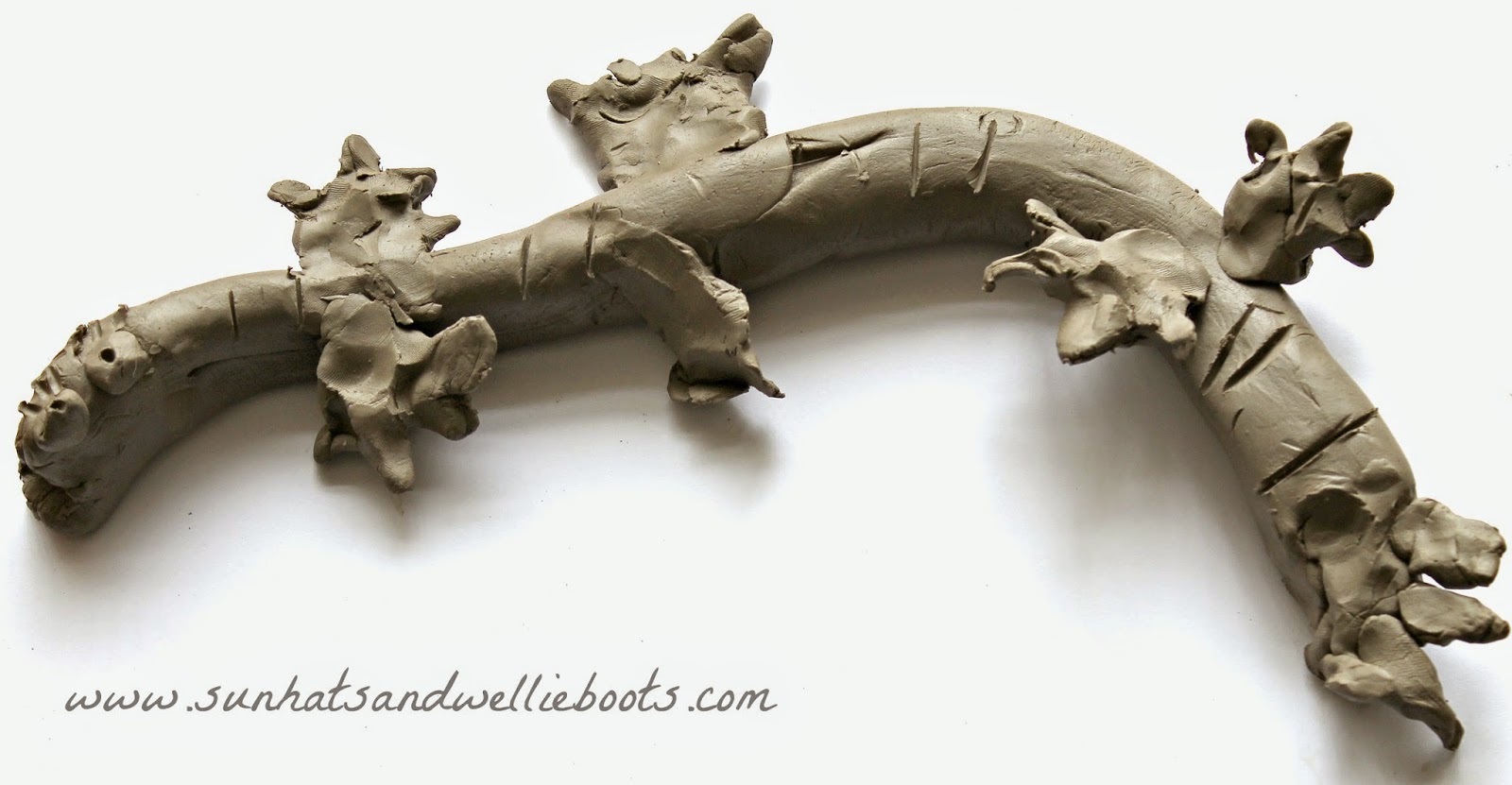 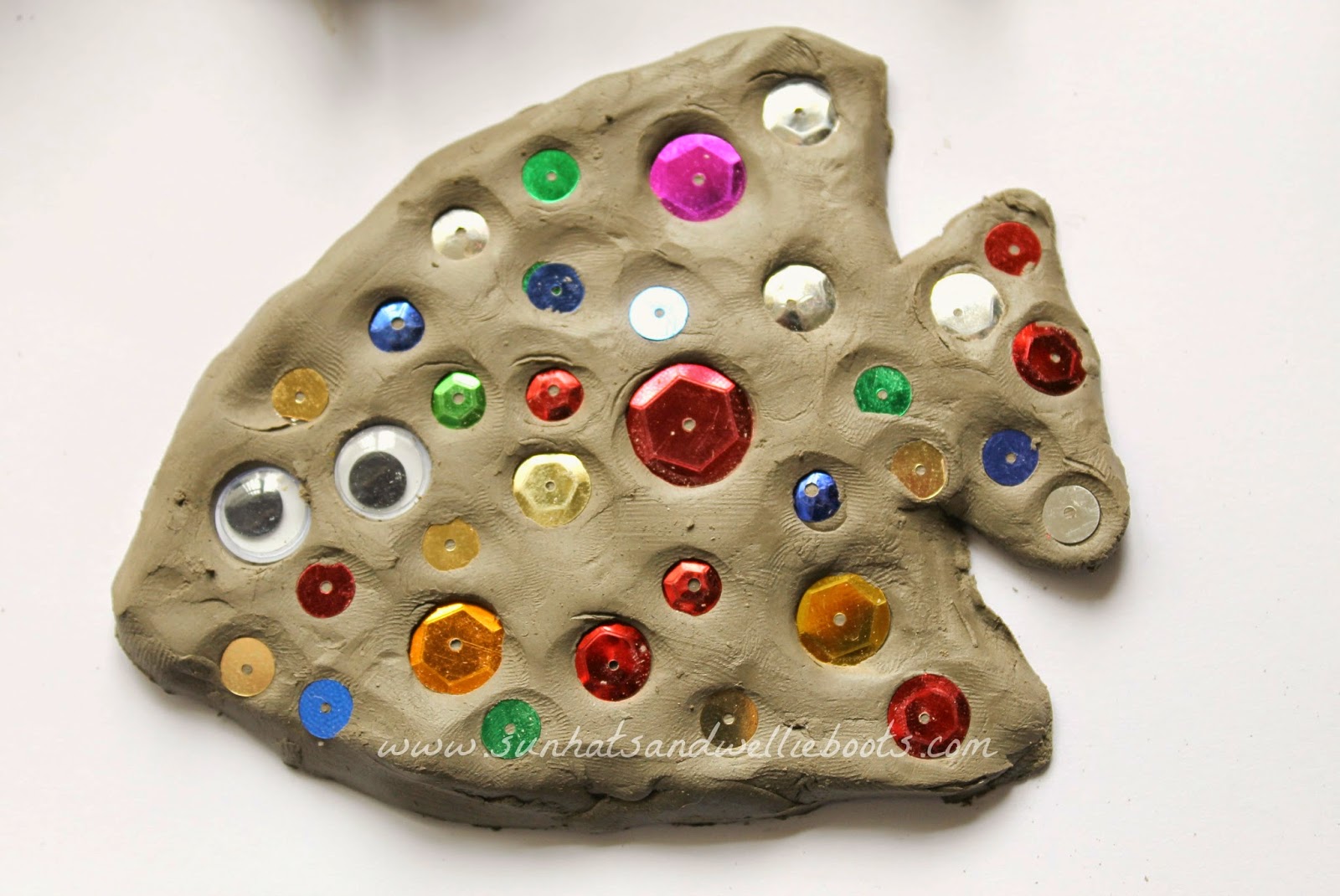 And finally "Rainbow Fish." With its shiny scales this of course would be perfect to make alongside the wonderful "Rainbow Fish" picture book by Marcus Pfister. 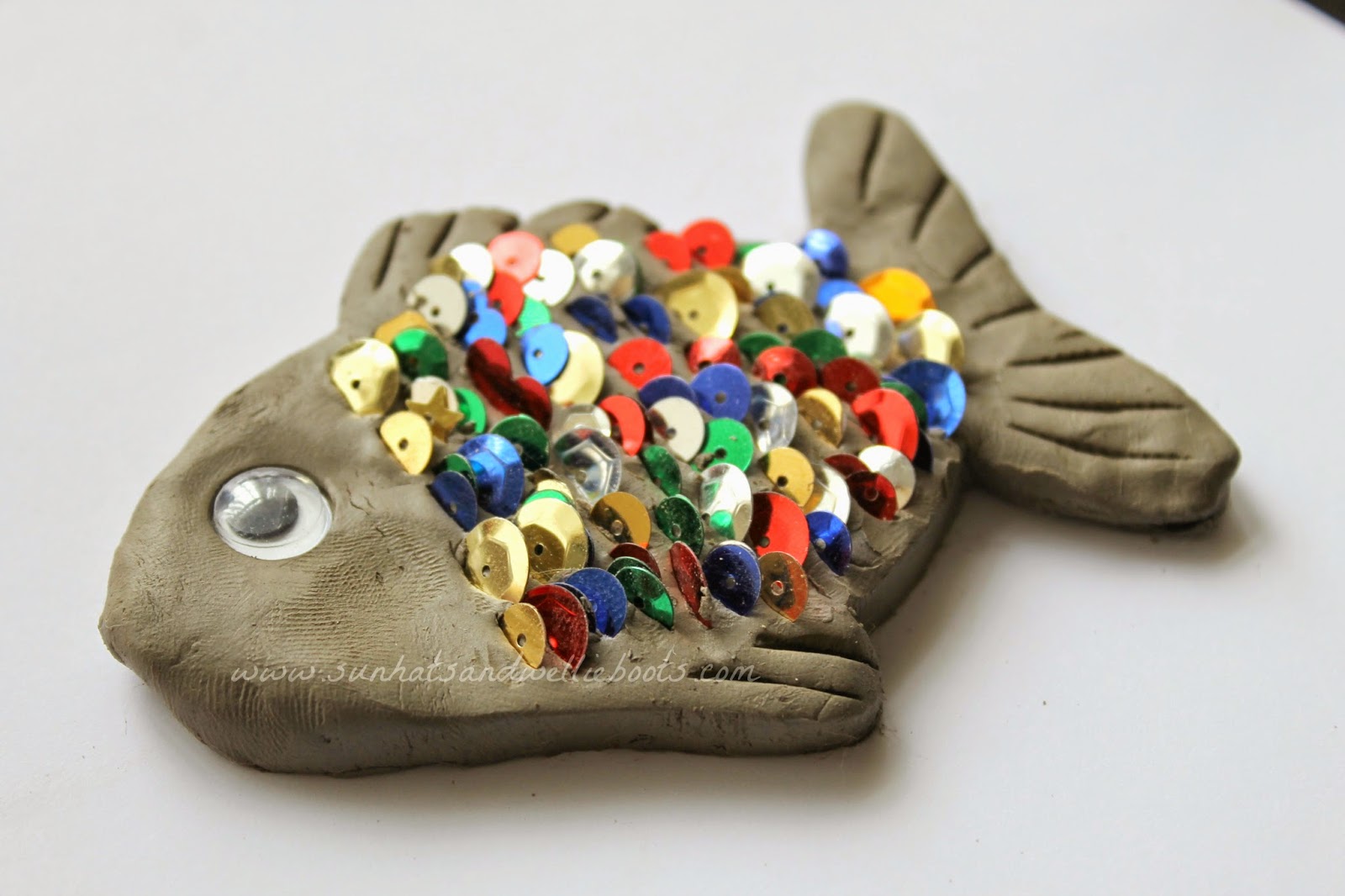 Once her underwater creatures were dry Minnie wanted to display them & was keen to make a "picture". I suggested she might like to use some materiel & here's what she put together. A colourful beach scene slowly evolved with her clay creations being placed along with some shells & driftwood she collected from her beach tub. She spent some time arranging & rearranging the items until she was happy with the design. 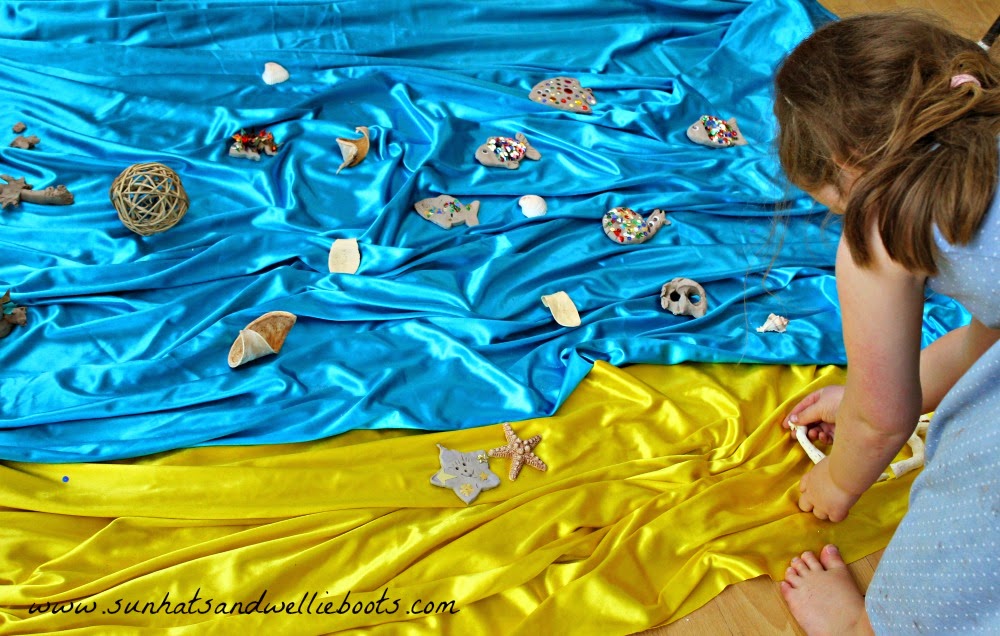 And then once she was happy she went for a paddle in the sea, turning this unique work of art into an interactive one too! 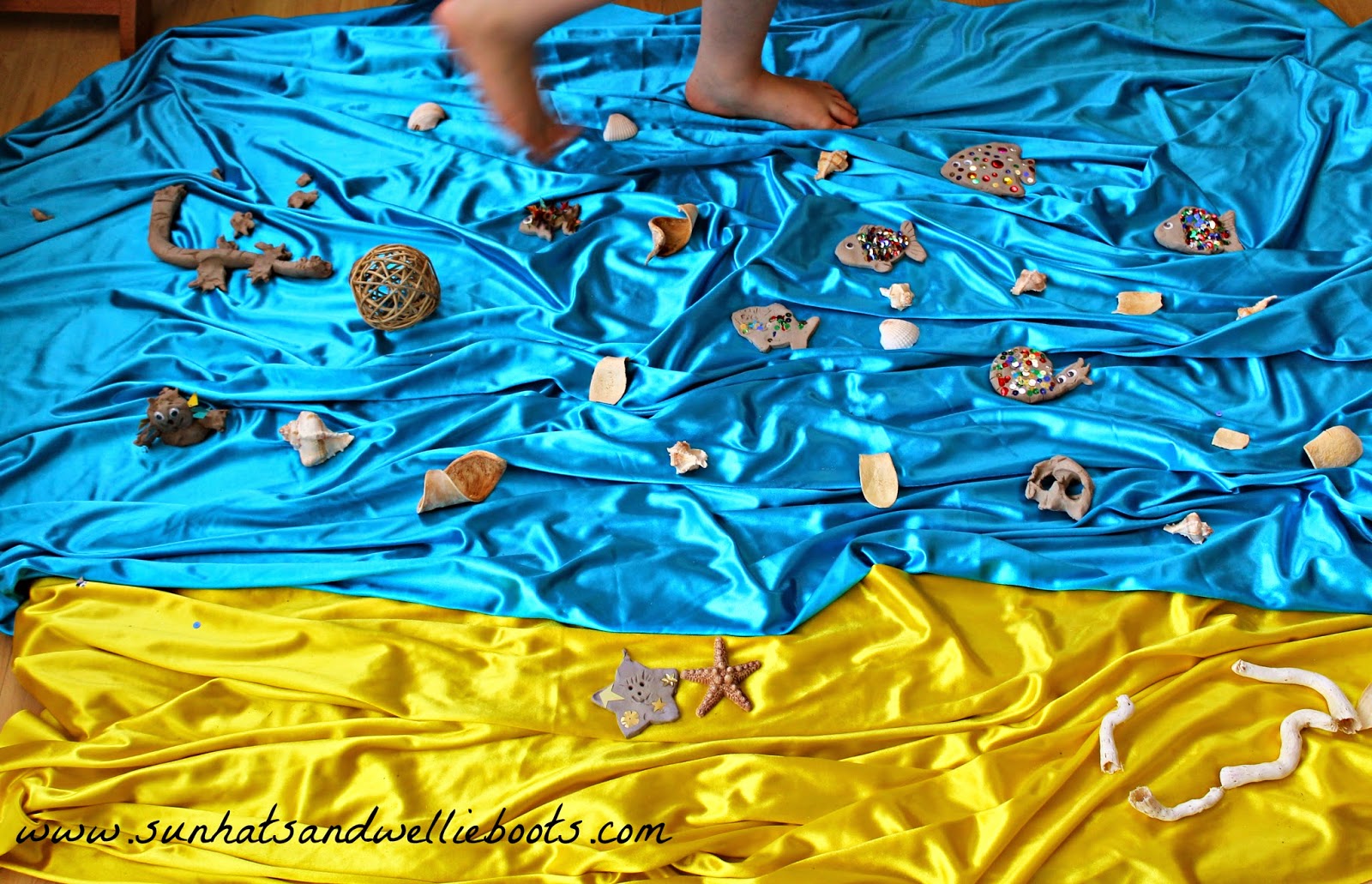 It was wonderful to see so much creativity evolving from one storybook, & Minnie's eagerness to display her work tells me she was pretty pleased with the results too. What a great way to explore self-expression, design, & imagination, & a neat way to encourage self-esteem too.
Thank you "Hooray for Fish!" for the fun & creativity you've given my girl since she was a toddler, I wonder what & who you'll inspire next?