How do you bottle Summer? Well I think we may have just done it with this delicious homemade cordial! Made from fresh flowers its light refreshing taste echoes the scent of a summer garden, perfect to enjoy outdoors in the sun, or for those cold rainy days when you just need a little taste of sunshine. This year the honeysuckle flowers in our garden have been prolific & regularly enjoyed by bees & butterflies. With so many flowers & buds appearing we thought we'd use a few to create our own home grown cordial. 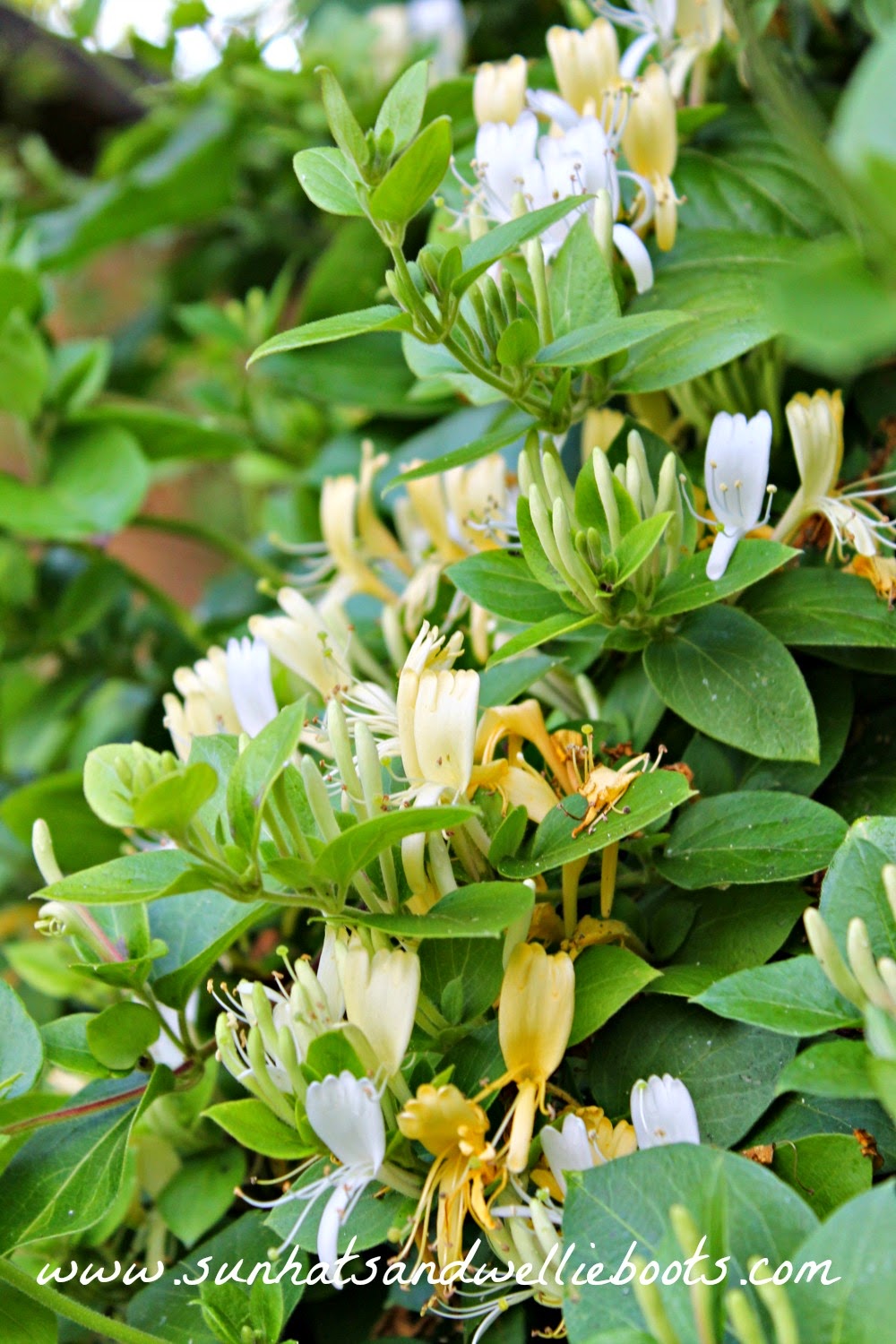 This honeysuckle cordial has been a great hit with friends & family over the Summer holidays.  I've been wanting to make some for ages but kept putting it off as I thought the process would be too time consuming, but actually it was much easier to make than I thought & was great to make with Minnie. 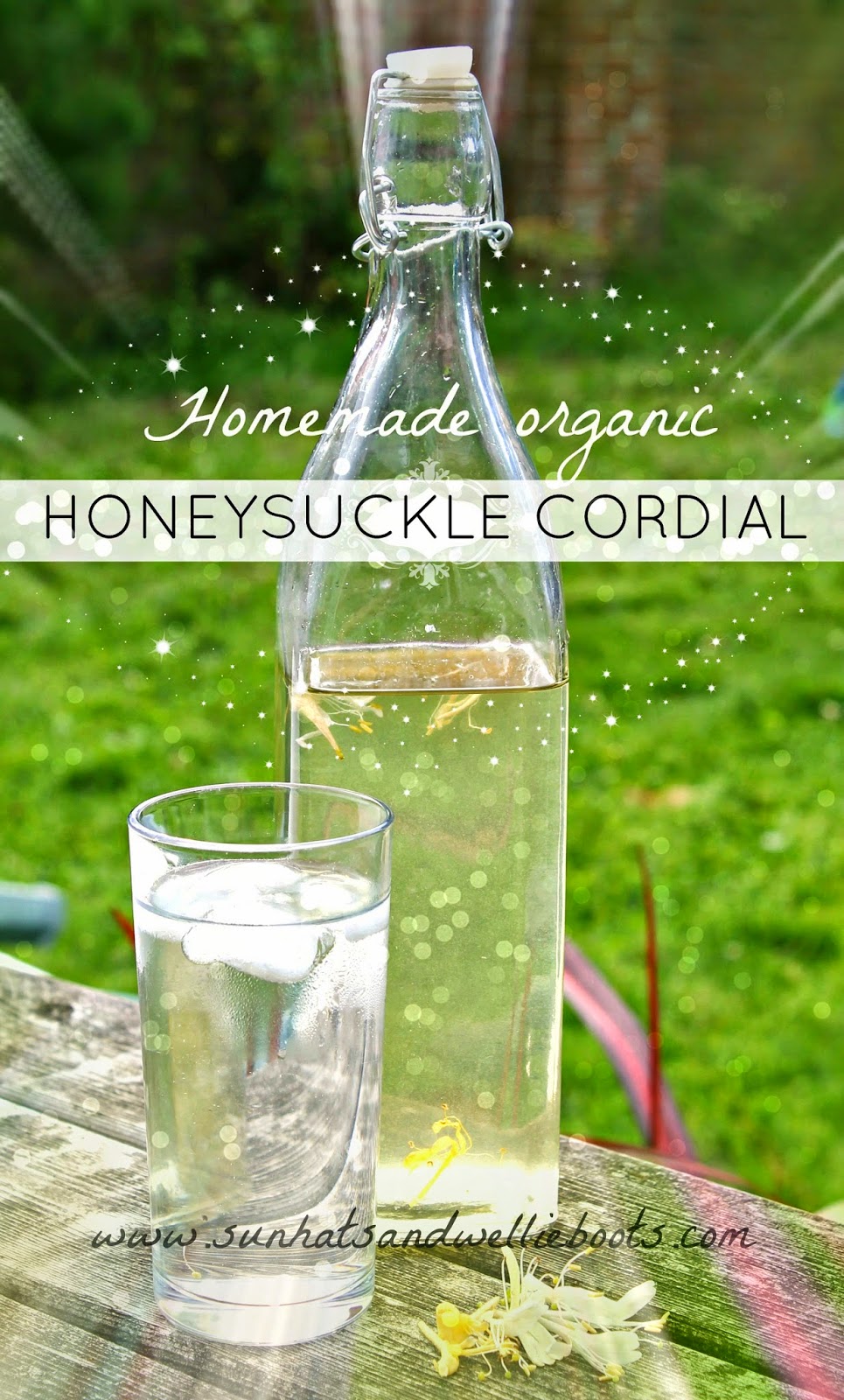 For our Honeysuckle Cordial Recipe we used:
2-3 cups of honeysuckle flowers
1 organic unwaxed lemon
2 cups of Fairtrade caster sugar
3 cups of water
1 teaspoon of citric acid (available from a pharmacy)

Minnie started by carefully picking the fresh flowers from our honeysuckle plant, making sure she left the discoloured & wilted blooms behind. She added the flowers to a bowl checking there were no leaves or extra stems accompanying them. Soon we had a dessert bowl full of golden blooms. 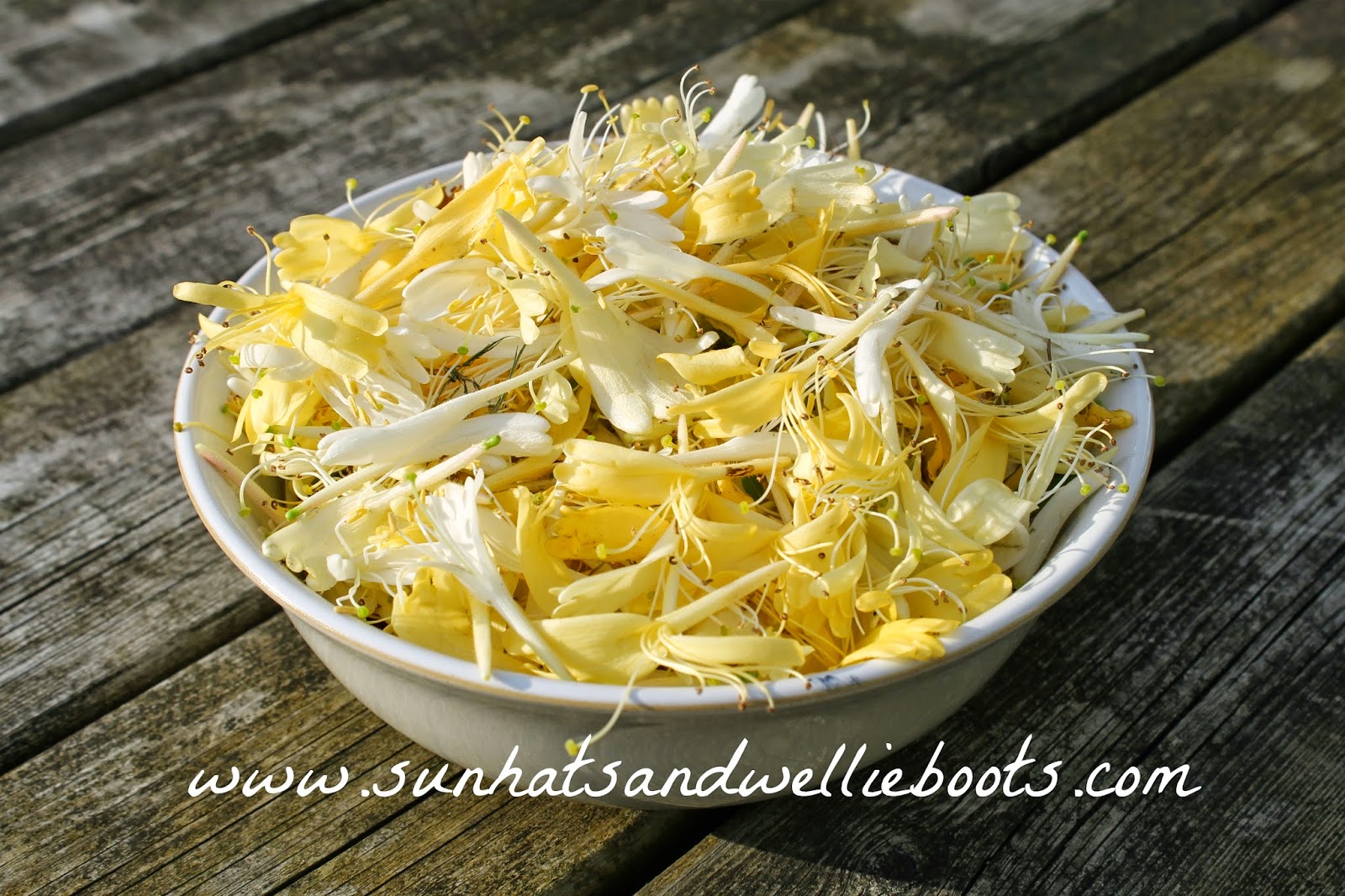 To make sure the flowers were clean & bug free we emptied the contents onto a clean tea towel & gently sorted through the flowers removing any leaves or other unwanted finds. 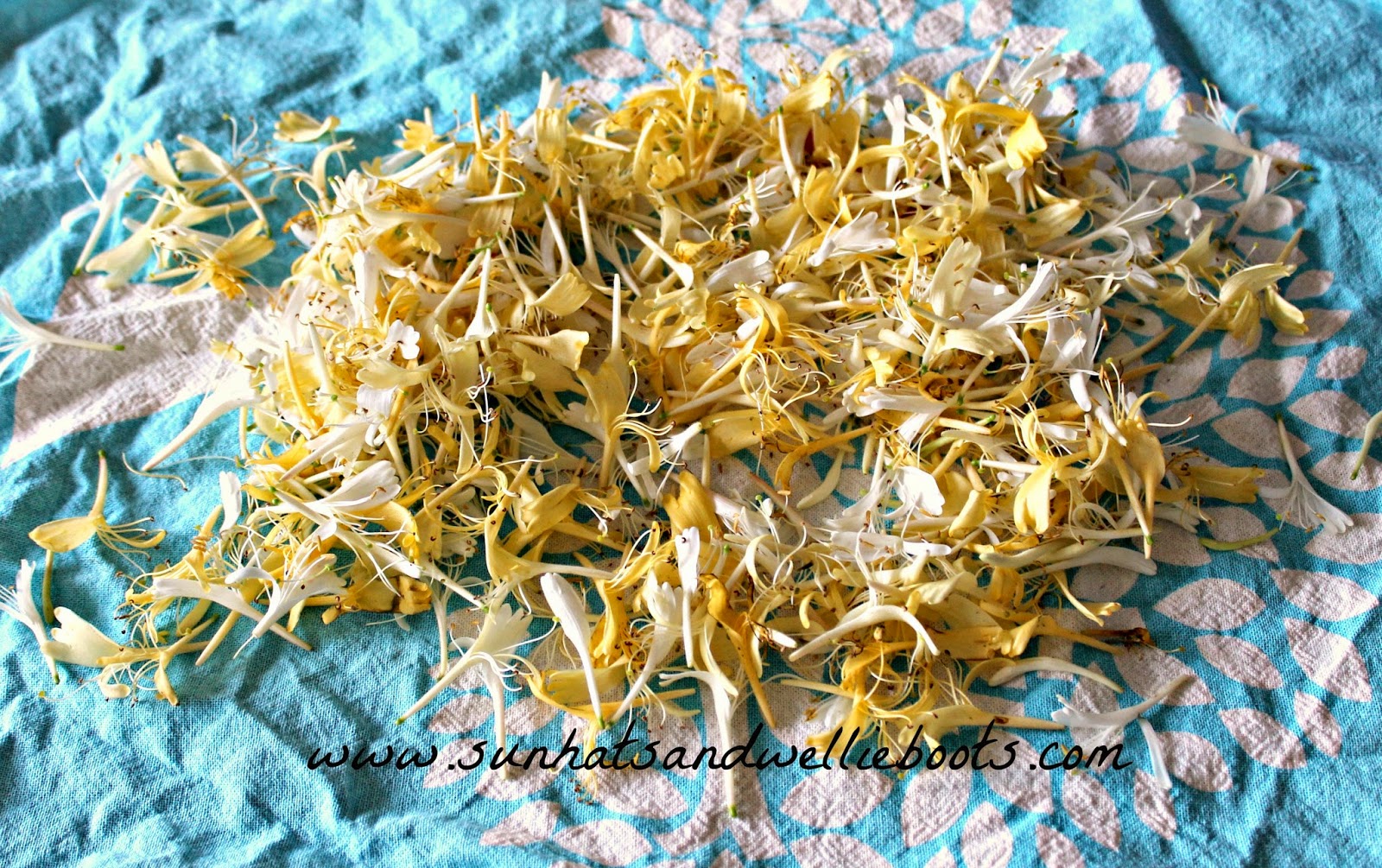 We peeled & sliced the lemon making sure there was no pith on the lemon skin, then added the strips of peel & lemon slices (but not the ends) to the flowers.

To make the syrup we added the sugar & water to a deep pan & slowly brought to the boil, stirring the mixture until the sugar had dissolved. Once the liquid was boiling we took the pan off the heat & added the lemon slices & peel, honeysuckle flowers, & citric acid to the pan. We stirred the mixture again with a wooden spoon, covered with a clean tea towel & left to steep for 24 hours.

It is very tempting to have a quick peek & stir the mixture, but by leaving the pan for the set amount of time the ingredients really have a chance to infuse. 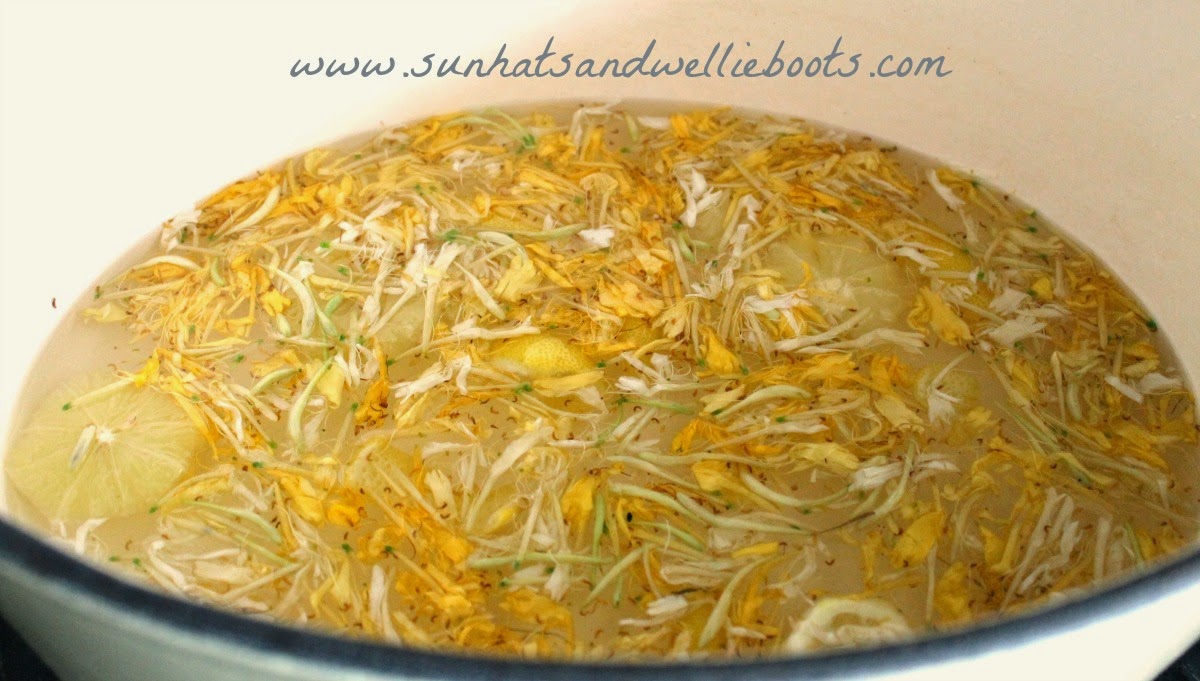 After 24 hours the liquid was ready to be strained & to do this we placed a sieve which we lined with a clean sterilized tea towel over a large mixing bowl. (You could use a muslin or cheesecloth but we only had a tea towel available which we sterilized by placing in another bowl & pouring over boiling water.) Using a ladle I transferred the mixture into the lined sieve & quickly the clear liquid began to filter through & fill the bowl. Once all the mixture had been transferred we squeezed the tea towel over the bowl to remove the last of the cordial.

We sterilized a recycled glass bottle (by washing it in boiling water & then drying in a warm oven, alternatively you could sterilise it in a dishwasher) & poured in our cordial using a funnel.

This gorgeous Summer nectar should keep in the refrigerator for several months. Our first batch disappeared quite quickly, but we made another bottle to keep until the days get cooler & we need that taste of Summer again. Serve it with ice & water for a cool refreshing pick me up, or with sparkling water for a fizzy honeysuckle treat. 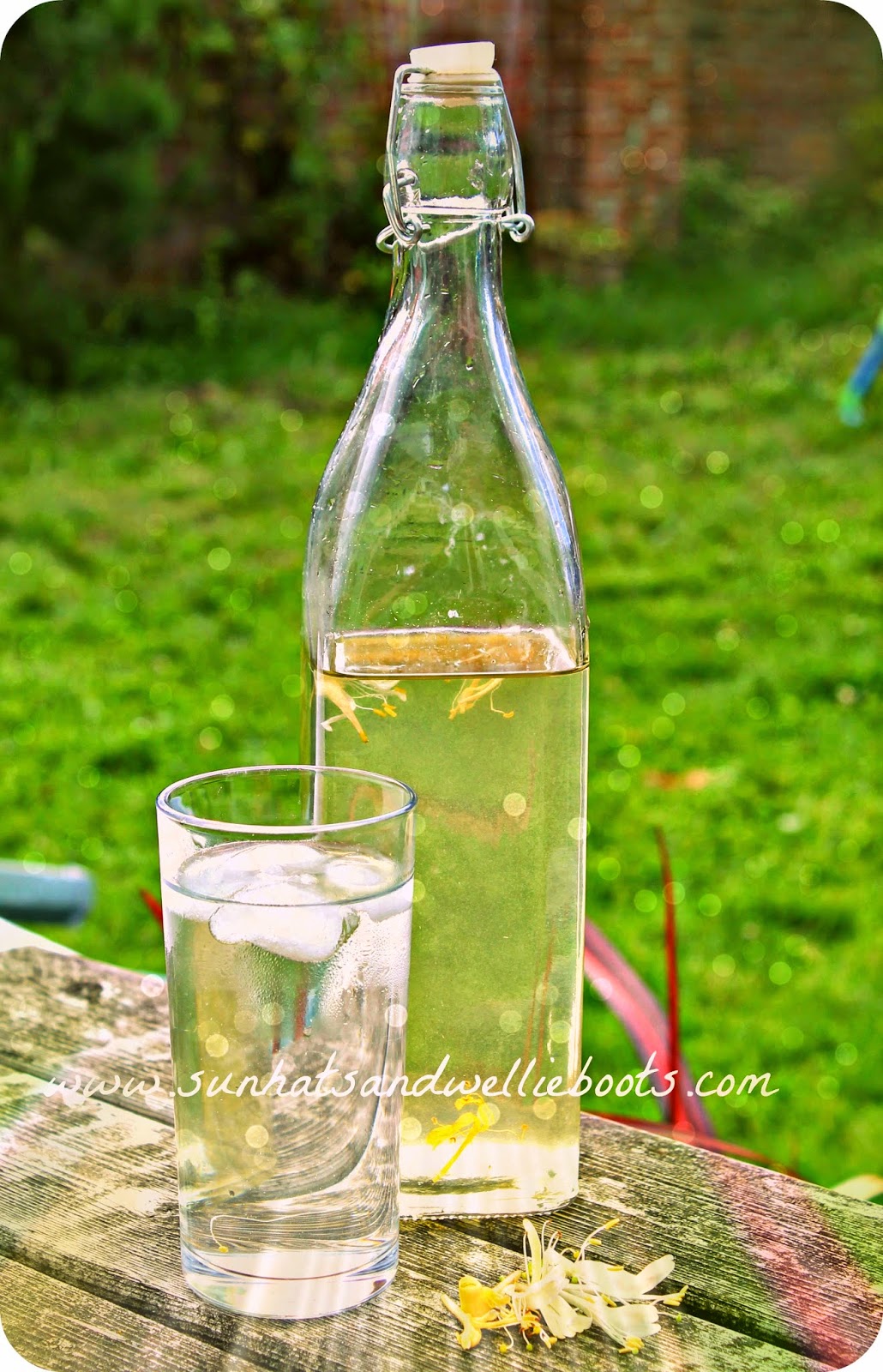 Not only does this cordial taste good, but recently I discovered it may help your immune system too as honeysuckle is said to have antiseptic compounds that are active against sore throats, flu, pneumonia & other respiratory disorders. I'm thinking this is the prefect drink to share with my girl as she heads back to school, it should help to fight against all those post Summer colds etc.

From collecting the ingredients she had grown in the garden, to squeezing the mixture & decanting the cordial, my girl loved being involved in every part of this activity, but of course the best part had to be tasting the cordial she had made!