Welcome to part 2 of our Teddy Bear Olympic Games! We've had our opening ceremony, so now it's time for the games to begin! Here are six activities we created which are mini versions of popular Olympic sports, all of which are ideal for preschoolers! Minnie was even inspired to create a few new sporting activities as well!

First up was the DISCUS! To make these we used paper plates & my little designer decorated each one using paint dabbers/bingo markers. (We found using a single plate worked fairly well, but later tried using two paper plates joined together which travelled much further.) 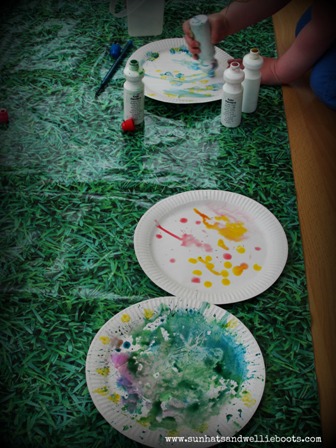 Before Minnie attempted our version of the discus, I showed her how the athletes threw them. She LOVED spinning around & throwing the plate discus, although initially it flew off in a completely different direction from the one we had planned! We tried again & this time measured the distance the discus travelled using a tape measure. Minnie loved finding the measurements on the tape & shouting each number out, & we began to compare which distances were longer/shorter. 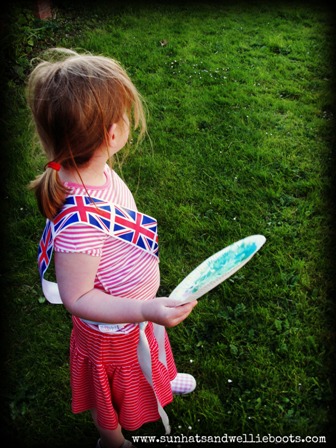 Next up was the JAVELIN! To make our version we used a large sheet of newspaper rolled diagonally & taped around the middle. Minnie was keen to throw this across the garden asap so we didn't have time to decorate it, but these could easily be painted, adorned with stickers, or wrapped in coloured paper/kitchen foil. 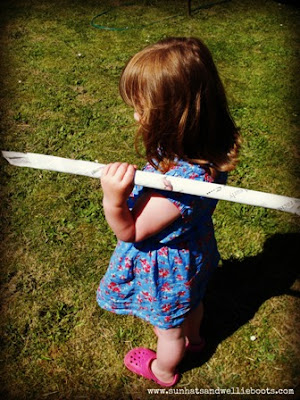 The javelin was great for exploring another set of movements, & again measuring the distance travelled.

Even the bears had a go! 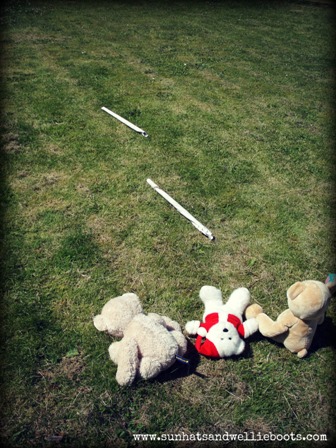 After the javelin, we had the HURDLES! As you can see (from the action shot below) these were easy to construct with a few chairs & broom handles! Using children's chairs gave us a perfect height for Minnie to climb/step over, & we still had enough room at the bottom for her to create a new game as she crawled underneath each one! Again we explored new movements, became more aware of space & surroundings, & this time we timed how long it took to complete the activity. Oh, how much fun a stopwatch can bring, especially when your child is timing you completing the activity! 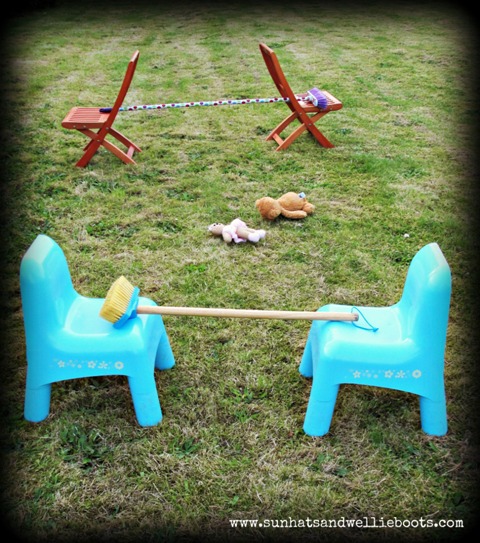 No Games would be complete without a RUNNING event. Here our teds are all lined up waiting for the final sprint to start. 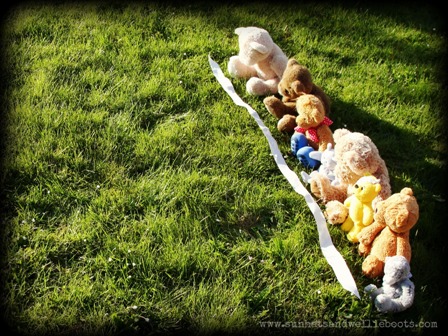 I had guessed Minnie would run with the bears, but I never imagined they'd be transported like this! 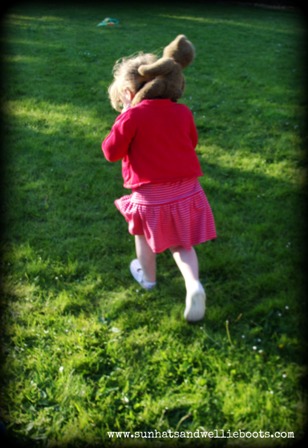 Five bears made it to our finish line... the others got a little lost en route! 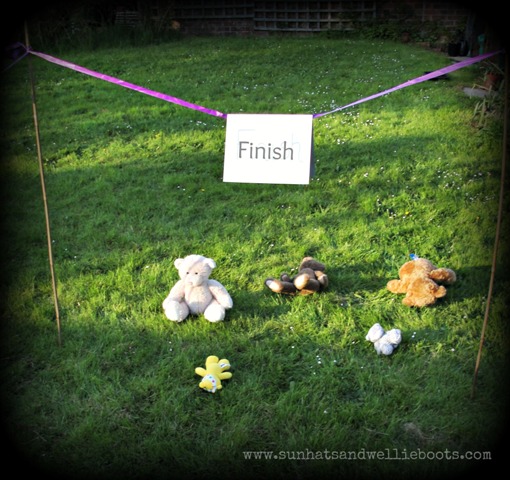 This activity offered a whole new set of skills to explore, fine motor moves (as we attempted to tie the starting/finishing line), problem solving (as we created ways of transporting the different sized bears), gross motor moves (as we ran), & literacy (reading signs & recognising familiar words/letters). 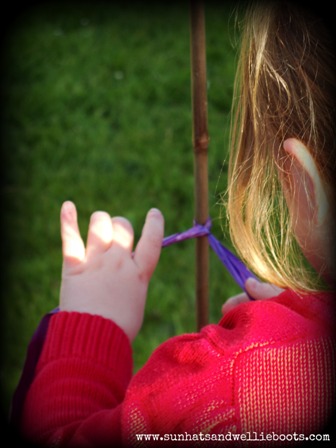 Our next sporting event was BASKETBALL! Ok, so it's not quite basketball as we know it, but here's our mini version of the sport, ideal for little arms. We used an old washing basket & a selection of different sized balls which we tried to get into the basket. We moved our starting line around to vary the distance the balls had to travel, which obviously made some attempts easier than others. This enabled Minnie to predict & adapt her moves to reach the target, perfect for hand-eye co-ordination, estimating & exploring distance & space, & controlling motor moves. 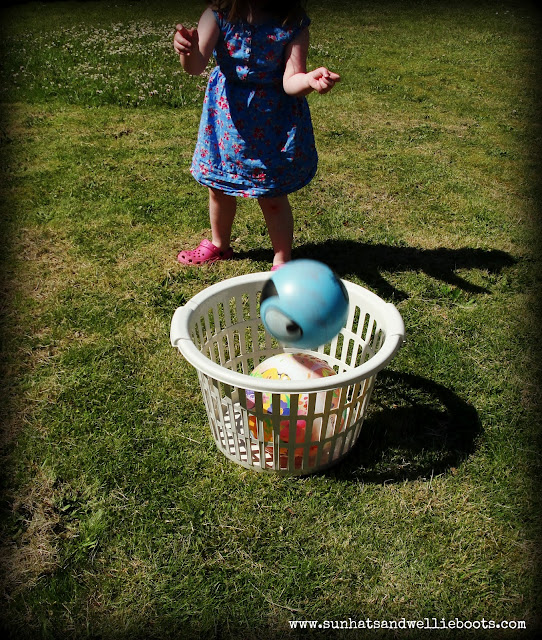 Minnie got really hooked on this game & soon we had Wellie Basketball! In the UK we have an alternative sport (mostly found at fetes/festivals) called 'Wellie Wanging', where the winner throws their wellies the furthest distance! Of course this was perfect for our Wellie Boot blog! :-) 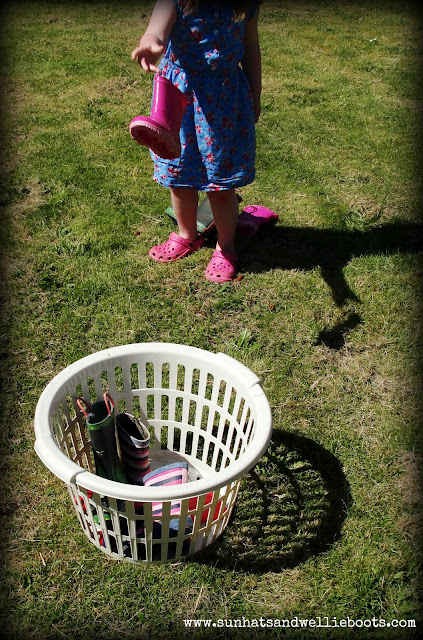 And after the wellie boots... it was time for the bears to join in! 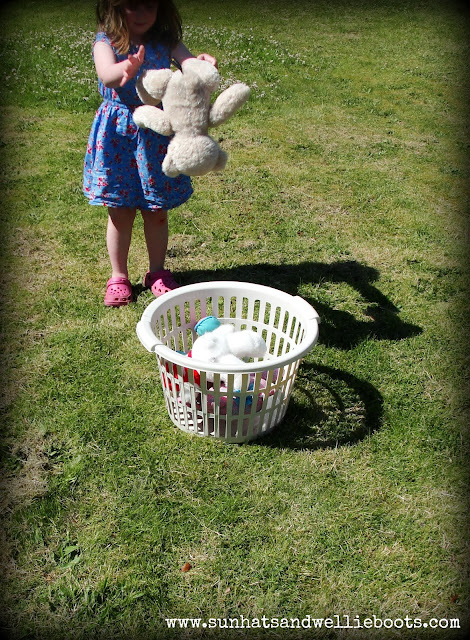 Loving this basket full of bears! What a neat way to get children to tidy their toys! ;-) 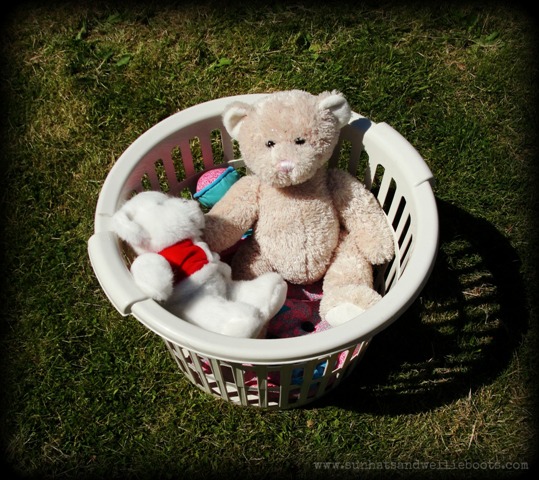 Our final sport was SAILING!
We made origami sailing boats with different coloured paper which we set sail (blew around) in our old baby bath! (This would be perfect in any large container, or bathtub too!) We coloured the water with a little blue food colouring, & the boats were off! 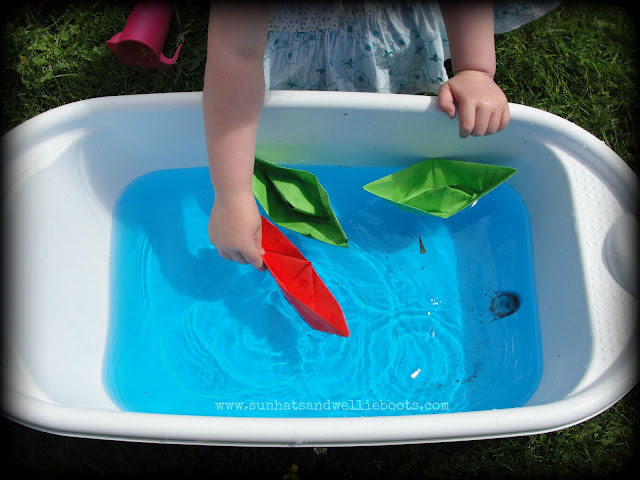 So there you have our six mini Olympic Activities ideal for under 5's (& grown up kiddos too)!

To complete our Teddy Bear Olympic theme we made Olympic Torches & Winners Medals, you can check them out here.