What to do with the insides of your carved pumpkin? How about making some Pumpkin Gloop, ideal for oodles of sensory play. 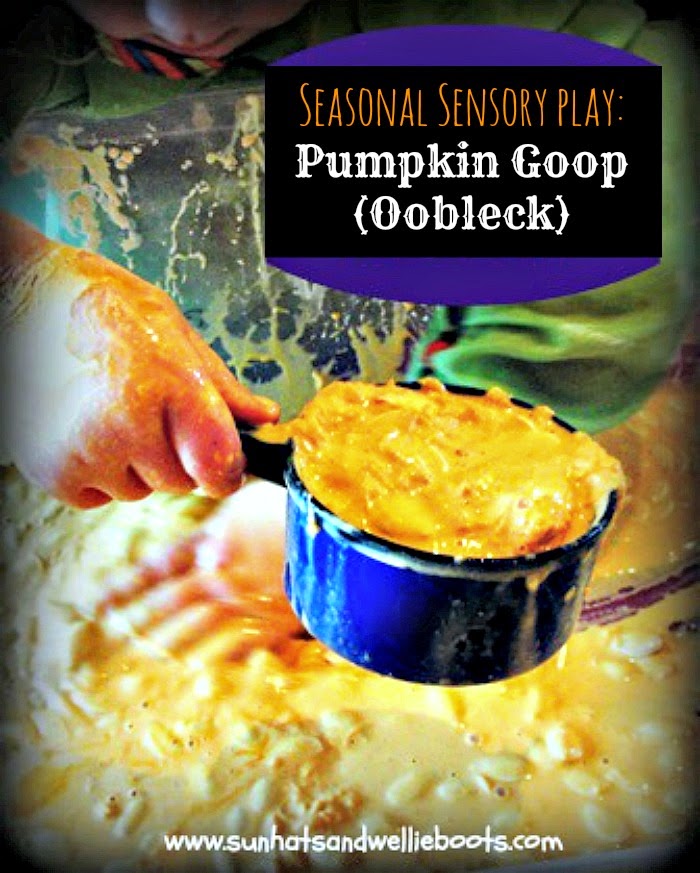 We picked our pumpkin from a local farm the other day & were ready to start carving our design, but obviously we had to prep the pumpkin first. We started by washing it, which was a fun messy water activity in itself (!) & once the mud was off our pumpkin was ready to be cut & the pulp scooped out. 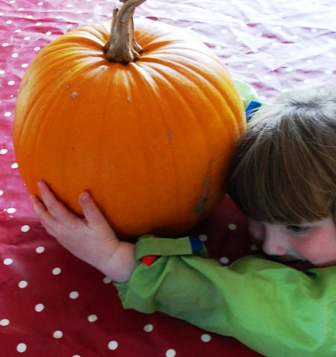 After I cut around the top, Minnie removed the lid & discovered the contents! Her hands were soon in the pumpkin scooping out the seeds. 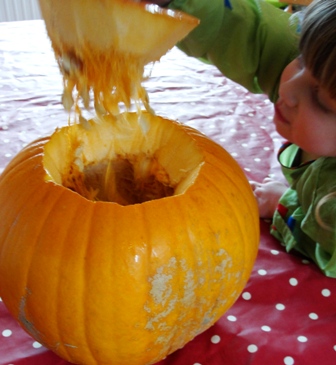 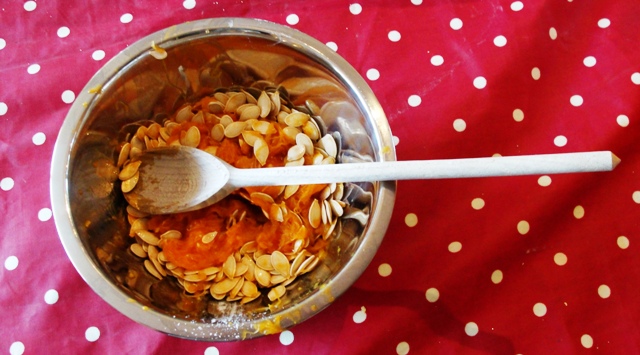 We love playing with gloop (oobleck) & these seeds just seemed a perfect accompaniment for some seasonal gloopy messy play!

We added a packet of cornflour to a large shallow plastic box, which works really well for indoor messy play. The mess is contained but it still offers lots of room for exploration & play. I would recommend covering your floor if it's carpeted... the gloop does have a tendency to spread. 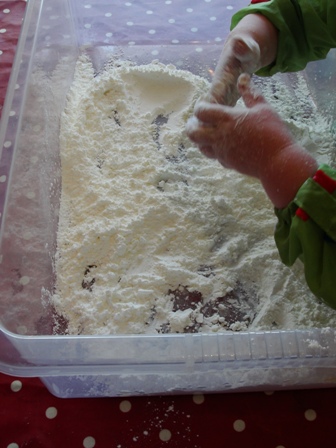 We mixed a few drops of yellow & red liquid food colouring to cold water to create a orange-ish pumpkin colour, & added the liquid to the cornflour a little at a time. 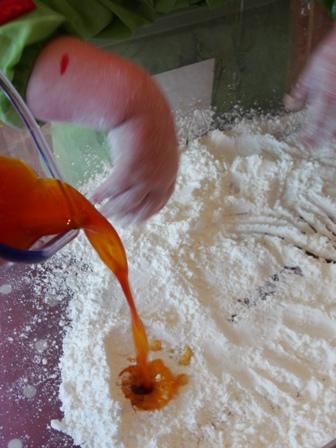 Minnie mixed until the cornflour & water were combined & the mixture thickened. (Take care not to add to much water or the mixture will become too runny & won't have that 'magic' gloop quality!) 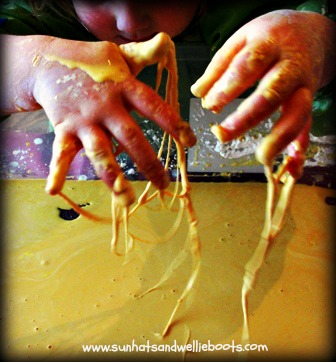 Our pumpkin gloop was ready to explore... 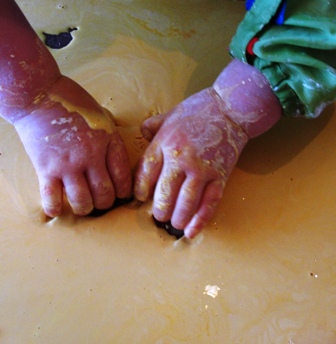 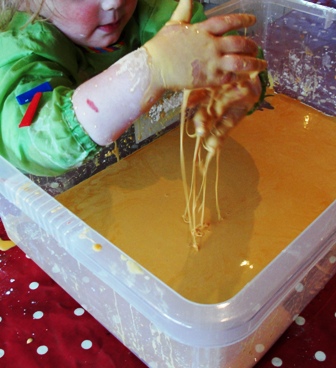 Minnie wanted to 'cook' with the gloop, so we added a whisk, but she soon discovered it was impossible to use as the mixture became firm when pressure was applied. She added a variety of spoons & a spatula which provided great tools for mark making. 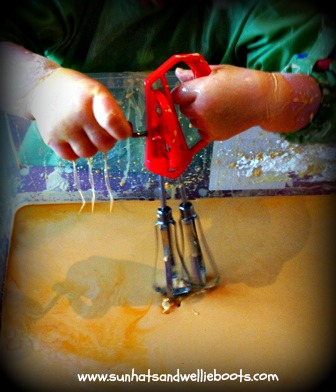 Then Minnie decided it was time to add the pumpkin seeds & pulp!

After more mixing, Minnie excitedly told me that she had made 'pumpkin soup' - yummy! 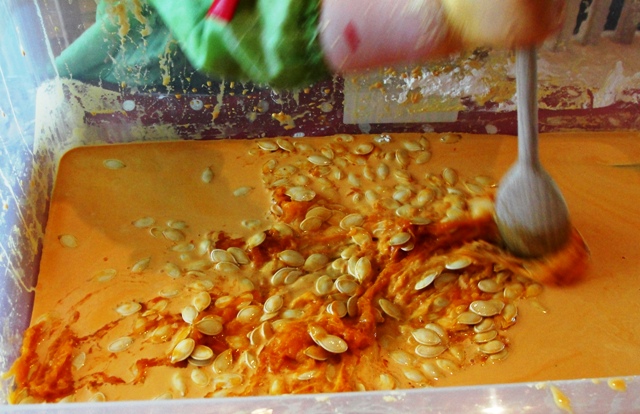 But gloop like this just has to be explored with your hands... 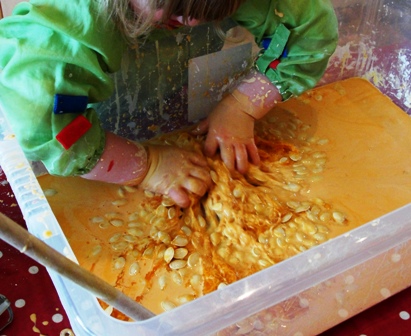 We found the gloop became runny as the pulp was mixed in, so added a little more cornflour to the mixture to return it to its original consistency. 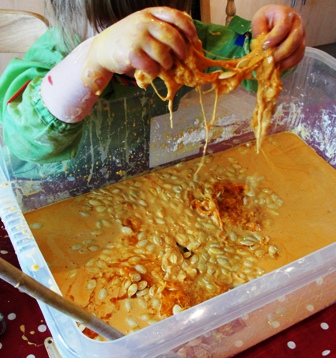 Soon pots, plates, forks & a mini frying pan (!) were added to the play, & Minnie was making 'pumpkin soup' for all her toys, followed by pumpkin pancakes. Thank goodness she didn't want to flip them! 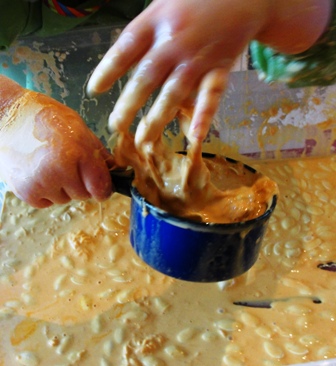 So much messy, sensory fun & discovery from one pumpkin! We Loved it!