It's that time of year again when our house is full of festive music & carols, whether we're practicing songs for the school Christmas play, or just singing our favourite carols around the house, the seasonal songs are in full swing! One of our favourite Christmas tunes is "Winter Wonderland" so we decided to create a small world play scene to explore alongside the song. 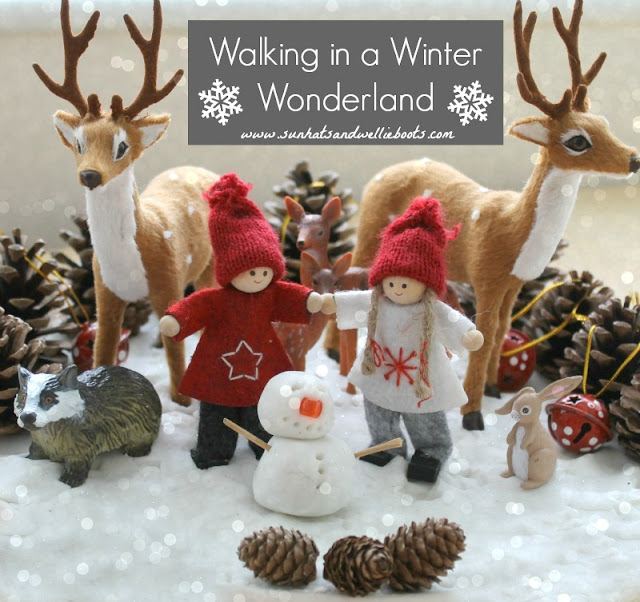 To create some snow for our Winter Wonderland scene we made a batch of white dough by mixing together 1 cup of cornflour (cornstarch), 1 cup of bicarbonate of soda (baking soda) & 1 & half cups of water in a pan on a medium heat. As the mixture bubbles keep stirring, it will soon resemble a mashed potato consistency, keep stirring until the mixture comes together as a dough. We allowed the dough to cool slightly before adding a good handful of silver glitter to make our snow glisten.

We then collected a selection of pine cones, woodland winter animals, a couple of small figures (bought from Tiger), some sleigh bells, coloured beads & small sticks to accompany our play scene. 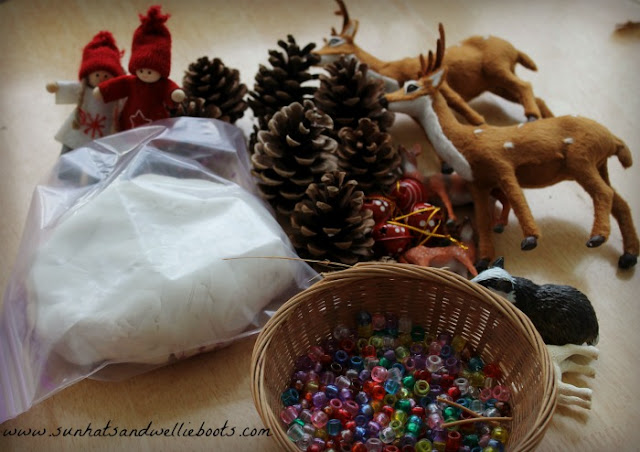 We flattened our snow dough onto a tray to create the base for our scene, keeping a little back to create with later. Then around the edge of the tray we added our pine cone trees, & our scene was ready to be explored.

The white dough made a great surface to explore animal footprints, & as each animal 'walked' through the dough their tracks left an imprint, just like animal tracks in real snow. 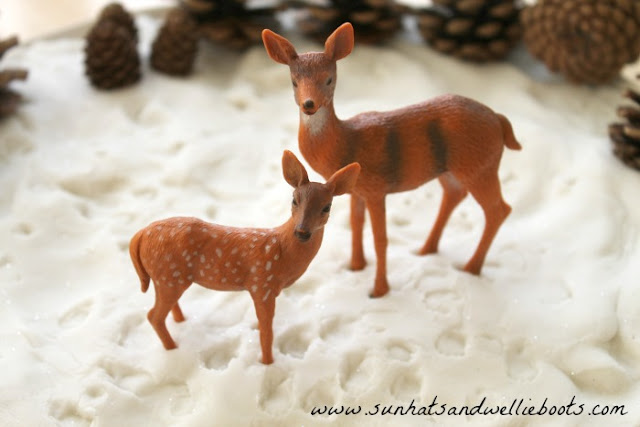 Minnie was able to explore the different shapes & sizes of the footprints, as well as the number of prints left by each animal. She also discovered she could make some neat patterns by mixing the footprints in the dough too. 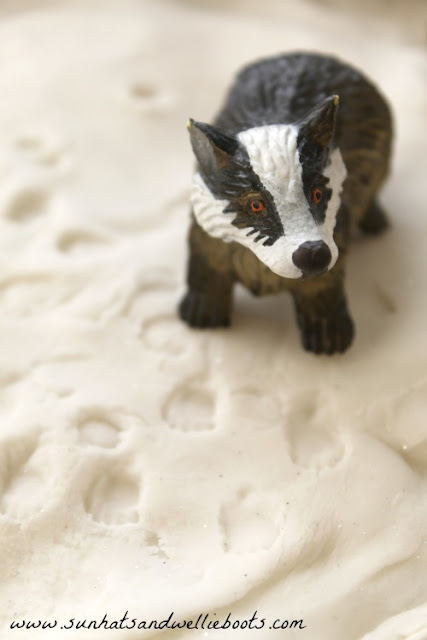 One of Minnie's favourite additions to our play scene were the deer (from Tiger) which left clear hoof prints in our sparkly snow dough. 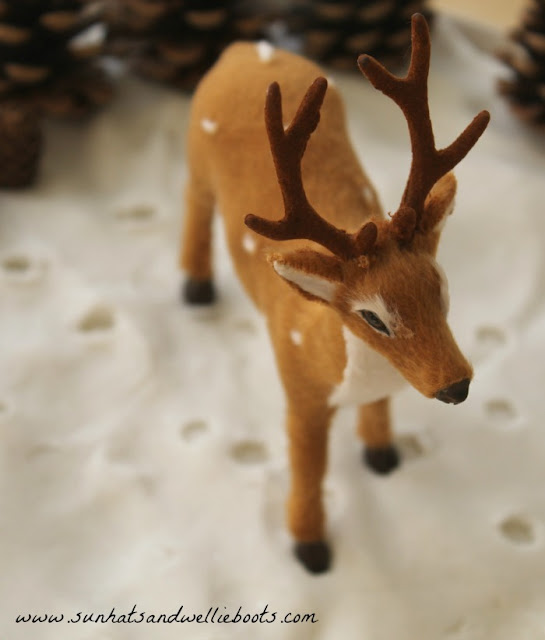 The pine cones left beautiful intricate patterns in the dough too which Minnie thought looked like snowflakes. 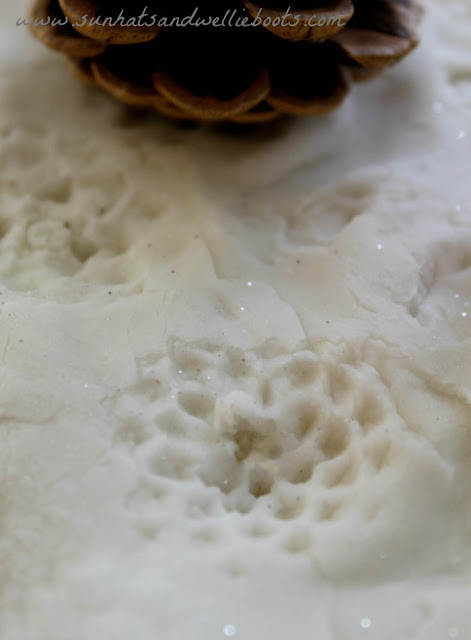 So after exploring our glistening snow my girl was ready to build a snowman! Using a little of the snow dough we saved earlier she  made a snowman using a coloured bead for his nose & 2 small sticks for his arms.  (I left a bowl of beads & small twigs on the side for Minnie to add to the scene if she wished.) 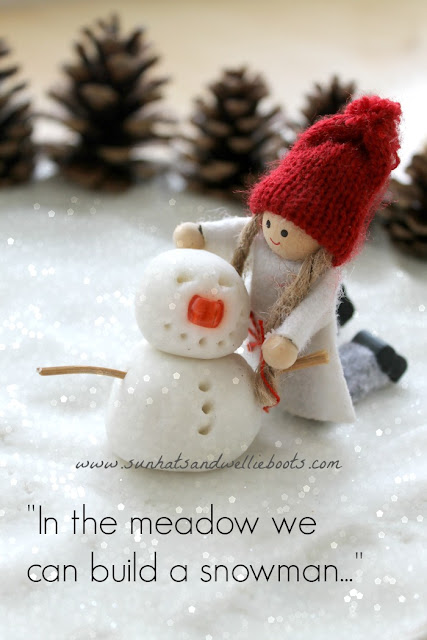 Minnie thought it would be fun to add the figures building the snowmen, & after they had built one snowman they needed to build another so the first one didn't get lonely! 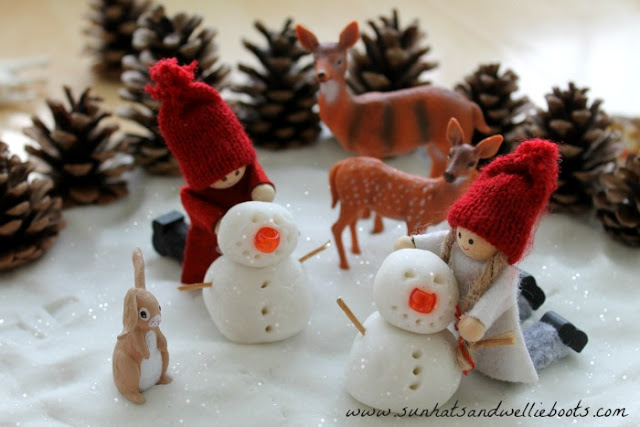 Then Minnie introduced a snowball fight! She rolled small snowballs & the figures threw them between each other. She especially loved splatting the girl's hat with a snowball, & the poor rabbit's head. 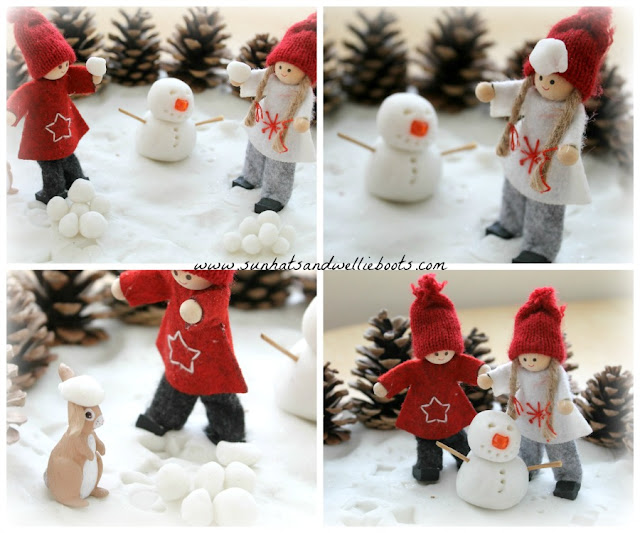 We discovered the figures made neat footprints in the snow dough too & it reminded Minnie of the patterns she'd made in the snow when we'd last had some. 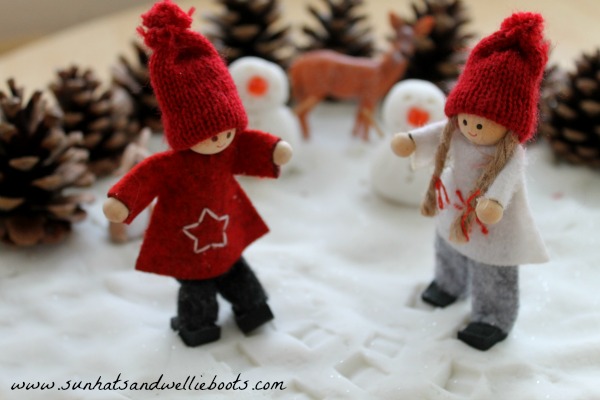 A Winter Wonderland play scene wouldn't be complete without sleigh bells. After exploring the sound they made Minnie used them to decorate the trees, & later gave them to the reindeers for earrings! 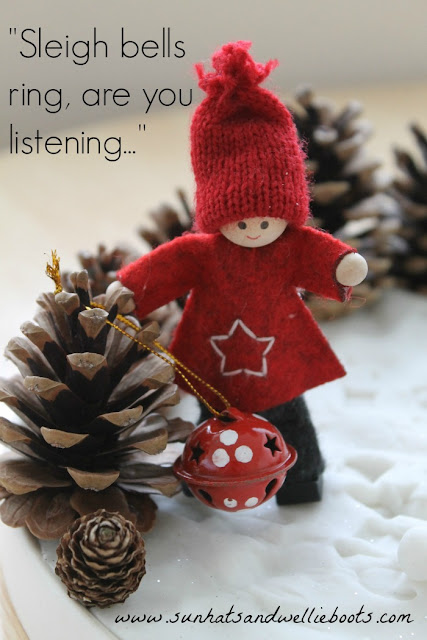 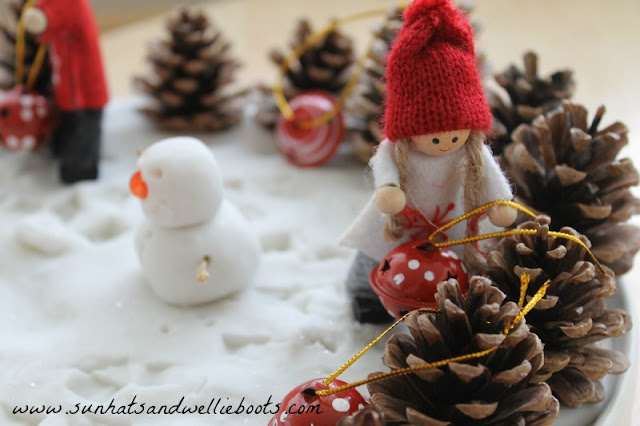 This is a great little sensory play setup to have out over Christmas & Winter, We've been singing along to "Winter Wonderland" as we've played with the scene, & Minnie's danced the figures along to the music, admiring the footprints they patterns in the snow. 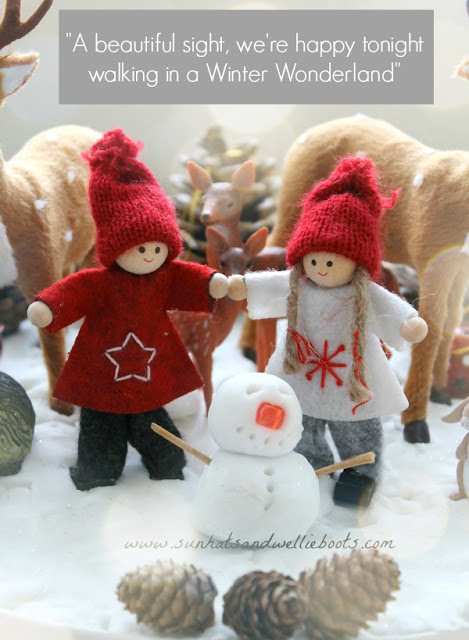 The smart thing about this play scene is that it's quick & easy to pack away & doesn't take up much space. If you keep the snow dough in an airtight bag it will keep for around a month, & the toys & accessories can be easily stored in a small basket or bag until they're needed again. Minnie has since added more props to her set including a house for the figures to live in. 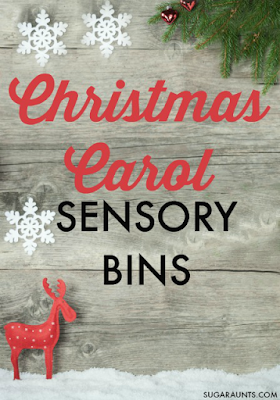 We're thrilled to be taking part in the Sugar Aunts Christmas Carol Sensory Bin Blog Hop along with some other great bloggers. Be sure to check out their Christmas carol sensory play ideas in the links below:
Away in the Manger | Sugar AuntsJingle Bells | Laly Mom
Frosty the Snowman | Still Playing School
Oh Holy Night | Teach Me Mommy
Jingle Bell Rock | Modern Preschool
O Christmas Tree | Best Toys 4 Toddlers
The Friendly Beasts | Line Upon Line Learning
King of Christmas | Squiggles and Bubbles
I Want a Hippopotamus for Christmas | Something to Offer
Silver Bells | One Time ThroughLittle Drummer Boy | Frogs and Snails and Puppy Dog Tails